Ask away…  What does the title of this blog, “Fright Night”, have to do with Bush’s Best beans?  Answer:  Nothing.  Good.  More about that later. 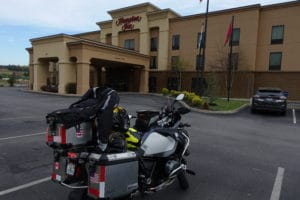 So I hustled out of my hotel room just after a satisfying Hampton Inn heavy barf breakfast — ready for a fun and tactical day, but first was a visit to the Bush’s Baked Bean factory, the nations largest brand of baked beans.  I had read that the tour was excellent — over rated, sorry all you loser people who post those reviews.  The tour was lame.  That said, it was a great bike ride. 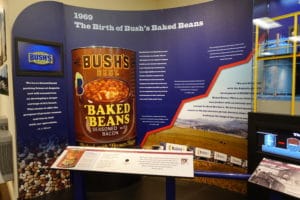 Not sure why and how it happens, but most of the factories I visit are in rural, rural, rural country.  Bush is no exception.  All I know is that the ride was just beautiful in old country roads with winding curves and lots of farmland.  Like, I have to wonder how on earth the Bush family has succeeded by growing up 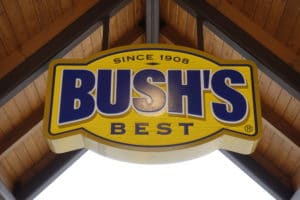 in the middle of nowhere?  How is that possible?  Of the millions of companies in the USA, how could a back country company grow into the largest brand — and by a massive margin of 6 times bigger than the next biggest competitor — also its the families 4th generation?  Anyhow, the tour was cheezy.    But thats not the point…  It was the journey that was fun. 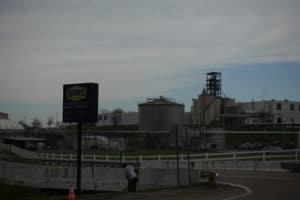 I will say that like most of these remote factories, they are very self sufficient — even the methane gas derived from the beans (in humans, gas  turns into a fart) are reclaimed and used to heat and operate the factory generators.  The water used for the factory and clean the beans are recovered, purified as well and used to grow grass which feeds their cattle farm which is adjoined to the factory.  Full circle, gas from beans moves the motors, reclaimed water creates grass-fed cattle — and that is smart.

After that event, I left on another of my bucket list of factory sites.  I had read that the factory which actually manufactures socks for SmartWool, New Balance and others, sells direct from their factory at big discounts.  Of course the last thing I need is more socks, but I was up for the experience.  This was going to be a 2 hour ride from Bush Beans.  Again, this industrial factory was in farmland Tennessee — however, just off I-75 which was convenient although the ride there was mostly backcountry riding. 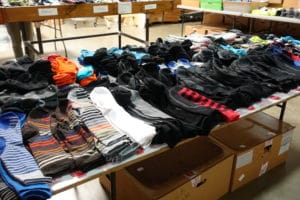 This time, the visit was fruitful.  You actually go inside the warehouse of the factory where the socks are made.   Amazing prices for super premium socks.  I even was able to get compression socks for my trip since I only brought 3 pair for my 30 day ride.  Check.

Now on to northern Kentucky to set up for tomorrow’s tours.  That would take a 4 hour ride and I would get to the Hampton Inn by 7:00pm — a full day.  I was seriously enjoying the process of moving freely from idea to location on the bike.

All along the ride, it started getting colder and darker and windier and threatening with rain.  My GPS kept popping up with a message “Tornado Warning” and “High Winds Warning”.  Ok, so I thought to myself, what do you want me to do with that information?  I kept looking and thinking if an actual tornado hit, then I would be toast.  The ride continued and it was getting more difficult since it started spitting rain and pretty windy. 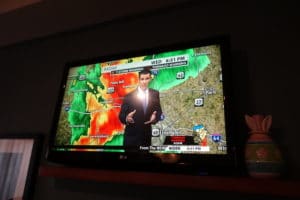 15 minutes before getting to the hotel I was pleased that I had dodged the worst of it — but not so fast!  I could see lightening in the distance and pretty bright.  Rain was coming down heavier.  To make a long story short — I was in the region of bone-fide twisters.  Lightening was all around me and it was pouring now.  I was seriously scared and not sure what I should do.  I was in the middle of nowhere country and wide open on the road and thinking that I’m the tallest structure around — akin to being a boat on the water.  I looked for somewhere to hide for a while, but I was really as rural as you could get.  Freaking out was an option and I took it — now I’m traveling 80 mph in a downpour just 10 minutes from my hotel and I’m not happy — like real frightened.  Lightening was everywhere around me.  80 in heavy rain could equate to your last ride but no choice. 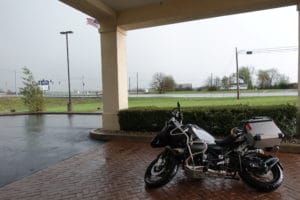 concrete canopy while I checked in.  Then all of a sudden I heard a “thump”.  That was my bike pushed over by the super high winds.  Thats a 800 lb bike just pushed over like a piece of paper.  That has never happened to me.  I saw the news in the lobby on the TV and it was all about the tornados which hit ground around me.

Happy to be comfy and safe.