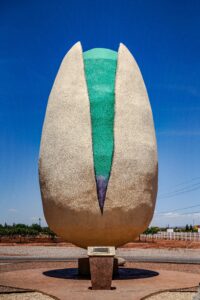 I don’t care, I did it and it made for a fun day.  Crazy enough, it met most of my expectations and even exceeded some.  Problem is, because I came so far south here, which I wanted to avoid the Mexican boarder towns — I’m now staying tonight in some boarder town to Mexico, Las Cruces, NM, which according to Wikipedia is ranked 97% worst place in America for crime.

The morning started at around 8:30am when I took off from Santa Fe on my 4 hour ride to Alamogordo, NM, home of McGinn’s Pistachio Tree Ranch.  I had enough gas in my tank to get me about 200 miles and although the complete trip was expected to be about 215 miles, I though it would be easy to get gas along the way later on.  Big mistake — by mile 150, no gas stations anywhere in sight.  I was starting to get a bit nervous — only 50 miles left in my tank, 65 miles to the farm and still no gas stations in my crosshairs.  I started slowing down to a crawl to use less gas.  New Mexico is mostly desert lands and the population is sparse so its not a shock that I would see only a few gas stations — but none?  It took until mile 180 and probably nearing a crap in my pants when a small town had a beaten down gas pump working.

Anyway, while riding, I was also thinking to myself, how is it possible to grow anything in these desert lands?  I see absolutely no agriculture anywhere and all I see is small cactus and desert bushes on sandy clay grounds — everywhere for hundreds of miles.  I was really amazed that this pistachio farm exists — but still, I have not seen it so maybe I over estimated its size and 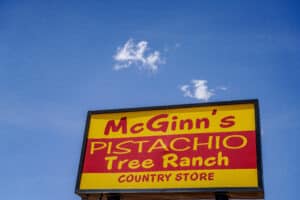 Rolling into Alamogordo, the town was like many, a beater of a town with either one or two Dollar Generals or Dollar Tree’s, abandoned, crumbled and rusted buildings, trailer park homes and inexpensive aluminum constructed structures.  Finally, I see the sign and excitement kicks in.  I’ve taken a day out of my life to come here — not that my day is worth much — but still.

I see the large concrete pistachio — I’m here.  And better still, the pistachio is clean, in fabulous condition and the paint is fresh.  This place is legit.  Further, the parking lot is full of visitors.  I’m not the only nutcase here — phew. 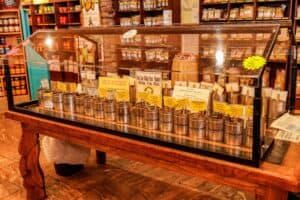 Frazzled, do I take my picture of the large icon first or go into the visitor center first?  I go visitor center.  Inside its much, much bigger than expected.  This family owned farm grows the crops, makes all of the products like crumbles, brittle, jam, ice cream and everything pistachio that you can imagine — all made on site.  Walking further inside, I pass an area with bags of nuts everywhere for sale.  Next to it is a case with about 30 or 40 containers full of flavored pistachio’s, both shelled and unshelled.  Also a few containers with pistachio brittle, including my favorite, chocolate pistachio brittle.  The lady working there told me to eat as much as I like and she meant it — she was working around the table and could care less about how many seeds anyone ate.  This should be called Dream Land, not Pistachio Land.  I stood there for a good 20 minutes chomping and tasting and taking pictures.  Now that was fun. 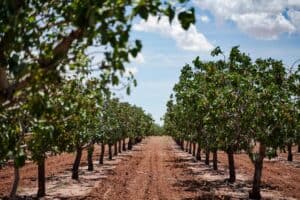 Later I went on a ride on the tour bus which drove around the property full of the 12,500 pistachio trees.  Apparently, the only crops that can grow on this dry clay ground are pistachios and grapes for wine.  McGuinn consulted with the University of Southern California to help develop the crop initially.  It takes 8 years to get the first crop from planting to harvesting and a tree only becomes fully mature after 25 years, so this was a long term project.  After the trees become mature, they will live for at least 50 years without any support.  Of the 12,500 trees on the farm, it requires only 4 staff 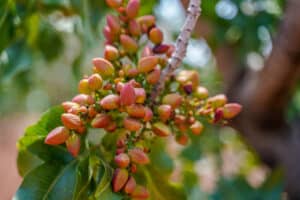 to manage the trees.  Machines pick the seeds at harvest.

Just one more thing I learned.  The seeds are covered in a protected skin while they grow — see the red skin like cover on the limb.  Trees are harvested in late August so I didn’t get to taste or see the nuts formed. 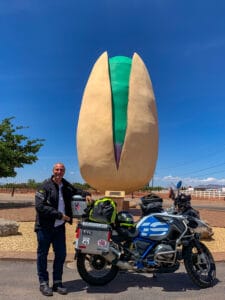 seeing the result, I won’t be hanging this mistake in my house, nor will I be making that tragic “V” with my fingers again — but for your entertainment, I have included the picture.  Lets not talk about it please.

I now got on my bike after feeling good about my picture of me with the large nut heading towards my hotel in Las Cruces.  Not expecting anything more than a quick 90 minute drive, I was shocked to see a sign on the highway noting that the U.S. Army White Sands Missile test areas are littered along my route.  Even better, I thought I saw a sign which said that there was a museum to visit — but I was not sure.

For those who are not aware, this land is famous to us who know a bit about WWII.  This is the place where the US government tested the new atomic bombs.  Yes, THE atomic bomb.  The Army actually set off atomic bombs in this area while it was being developed and the people who lived within hundreds of 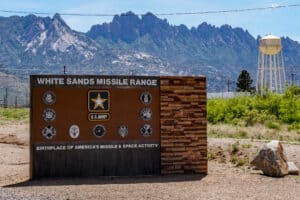 miles died of cancer in later years.  That is why I was so shocked to see they still test all sorts of missiles on these 600,000 acres of lands in New Mexico — yes, I said 600,000 acres — that’s bigger than big.

The lands on both sides of the highways had scattered buildings and structures as far as the eye could see.  There were also tons of cameras along the highway — including a series of maybe 20 cameras in a row.  I was getting excited and happily doing 180’s viewing the buildings, sheds and clusters of stuff — all designed to test missiles.

Finally the sign showed up again, 8 miles to the White Sands Missile Range — and Museum.  I’m in.  I turned on this quiet road and noticed a silver car following me.  I wasn’t nervous or anything, but I knew I was being followed.  Finally, after tons of 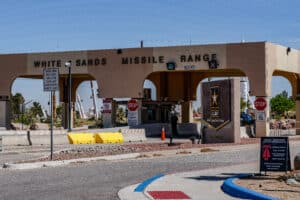 warning signs was a tiny parking lot in one direction and going straight was the gate to enter the base.  I was confused, I didn’t see the museum?  I yelled at the guy at the gate — “Is the museum here?”.  Its closed at 2:30.  Nutty enough, I can’t imagine anyone other than me visiting this museum.  Anyway, I yelled at the same guy, “Can I take some pictures of the sign?”  Yes.  Ok, so I did — to remember the adventure.  I also took a picture of the gate for Army personnel only.

After leaving, the same silver car followed me out.  That was a fun detour — albeit short and not finished, but still, fun.