Feature image is of our first Patagonia sightings along the Famous Patagonia Route 40.  This catchy sign about the store is in the town of San Martin de Los Andes and it’s a chocolate shop.

Of course, I have really been lax in posting on the blog over the past week.  Why write crap that is not interesting?  We have been riding since Santiago to places that have little interest — to me today — and maybe when I look back at this post.  The scenes have been anything but inspiring.  I can’t even muster to take pictures because there are no interesting people or scenery.  The towns not that interesting or nice.  Images are nothing special so I am shooting much less these days.  Sure occasionally you get a view of some hills with low hanging clouds — that’s cool, but otherwise, eh, its just ok.  We could be riding in many similar places in the States; Virginia, Kentucky, Tennessee…  Really, this part of Chile has been so much like the States it’s scary.  The people are 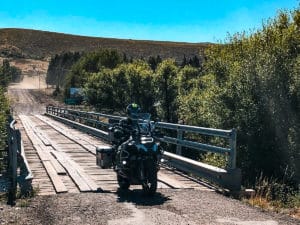 predominantly Caucasian, the mannerisms are civilized and it just feels right.  Sure, traveling into the crap of Columbia, Ecuador, Peru, and Bolivia are interesting for sure, really interesting but — its hard on your body and mind.  Those places are just so messed up it’s almost impossible to explain.  Nothing works right and for some reason, the Spanish conquerors never left the mindset to make their piece of the world a better place.  Chile and to some extent, southern Argentina, with its European immigration after the war have built a small and working country which is 60% as nice as the USA — and that’s great compared to the 95% shit in the mostly Hispanic super poor and crumbling and dysfunctional countries.  That said, I would rather ride in those messed up places any day.  I will add that the natural scenery of the Andes in those Hispanic countries are better than awesome and I miss that now. 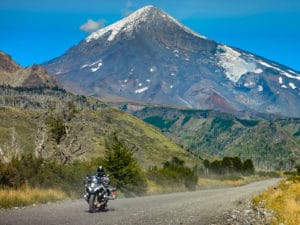 Yesterday we stayed in a Chilean rural town, Pucon, which could have been any very popular rural tourist backcountry place with a beautiful lake, small boats and lots of people.  In fact, in northern Ontario, Canada these towns are known as Muskoka or Haliburton.  This town was twice or three times the size, clean, full of maybe a thousand people and reminiscent.  But this place was nicer just because of its lake community and size of options of really nice restaurants, the activity on the lake and the stores and most important — surrounded by volcanoes, mountains, and hills — Seriously nice.  That said, I could have lived without it even though it was our day off.  I just want to ride in the mountains or somewhere interesting — going to a lake community is not where my head is now — nor with most of the guys.  The entire group had a steak dinner in town and started eating last night at 9 pm.  My stomach was bubbling and churning all night — Note to Phil: … Never again eat at 9 pm.  I hate it.

Today we crossed the Chile border and into Argentina again.  Were now coming into the top of the Patagonia region — very top 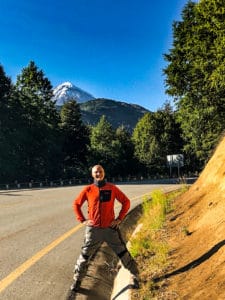 and we still have about 2,500km to Ushuaia and then we head north again up to Punta Arenas.  Well, its a bit of an exaggeration that we are in Patagonia– don’t hold me to it, but today is the first sighting of Patagonia signs, it is still a long way to go.  I will add now that the days are getting longer for sure.  Were now more south in latitude than the bottom tip of South Africa.  Along the Chile route, it really felt like any lake region in northern Ontario, Georgia and North Carolina lakes, or even Maine and toss in a hint of Northern California because of the hills surrounding us.  As time continued, I kept feeling even better — as if I were in British Columbia — outside of Vancouver or Seattle — the hills, mountains, green and not so green grass, nice curving and rising roads and beautiful lakes.  Just beautiful. 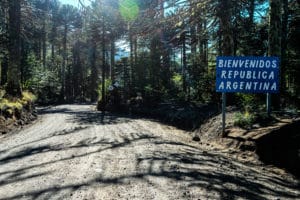 The crossing was a nothing-burger into Argentina — very quiet and very quick — in fact the quietest and quickest of all crossings we’ve had to date.  We all appreciate that.  However, after passing the final gate into Argentina, we hit a soft gravel road.  After all this time, I still hate it when the gravel is mixed with sand and it creates the feeling of havoc or damage [on me].  Gravel roads are no issue but when mixed with sand — that’s the toxic blend.  The bike’s wheels, although super aggressive treads, move around and have no grip.  I get very nervous.  Talking with the guys, everyone feels the same wandering of the tires, but they just accept it and power through it — I get very uncomfortable although I am familiar and know what to do — still, the feeling of imminent rolling sideways and down just takes over my mind.  It was only 15km and went fast. 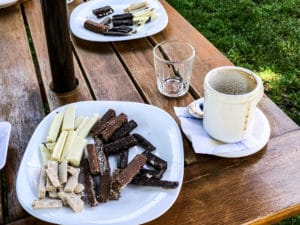 chocolate and ice cream shop for a coffee.  It was really someone’s house that had an addition to the sweet’s shop in a small random town.  I chose to pass on the ice cream which everyone else had — but the proprietor was so nice — she brought out what had to be a couple pounds of chocolate cut into pieces; white, milk, dark and nougat at no charge.  Just so much that I lost my mind and could not stop eating them and this time I’m not exaggerating.  The picture of the plate and chocolate is after we all finished gobbling down on the massive mound of goodness and happiness. I had to have ingested a few thousand calories and that’s fine, but my stomach was a mess after.  Thank you, nice lady, who owns the chocolate and ice cream shop — I owe you one.

Arriving early to San Martin de Los Andes which is another ski town with a small village the size of Breckenridge in Colorado.  Again, it seems like a waste to come here early when we all want to ride.  Anyway, its done — were here.  Real nice village and I will have an early lunch, no dinner, and some internet.  No Fox News and the slow internet make me upset — that said, I really only have had Fox News twice in the past few months but I got spoiled last night in Pucon on television.  It’s going to be an early night.