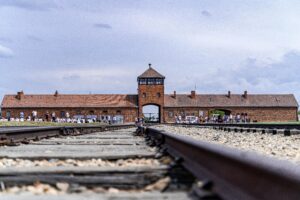 Feature Image is shocking and I’m sorry for that, but it fits the days touring I did at Auschwitz and Birkenau camp near Krakow, Poland.  I’m going to load up this post with images that I took at the camps — does not relate to the text — but I want to get these exposed:

Going back a bit, after I left Manfred, I headed off through a very new high speed highway — starting off in Germany and then morphing through the Polish border.  As with much of Poland, it has some new found wealth and construction for infrastructure is everywhere — especially on the highway systems.  Most are gleaming new and flat concrete decks, fresh sound barriers, recently painted right off the assembly line light poles along the route — and even more interesting — virtually empty of 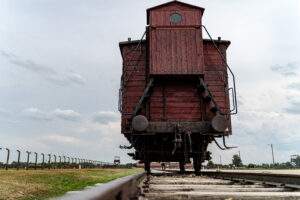 vehicles.   This means its full-on open up the throttle to 100 mph and nobody cares.  Crazier is that there are an overbuilt amount of gasoline stations along the Polish highway corridor — all brand new and large, very large and modern from Shell, BP and a local Polish brand.  Along the Czech days, I often almost ran out of gas looking for a station.   It almost makes no sense, but I guess they are building the future today — similar to what it might have been in the 1950’s when America went through the same procedure to build our mass highway systems. 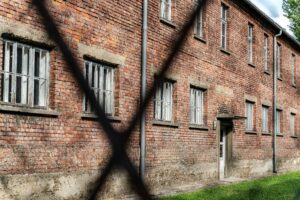 I had finished the entire day ride with Manfred and leaving him at 4pm meant that I would roll into Wroclaw, Poland by 7pm. I definitely had never heard of Wroclaw, but in a quick snippet, its a city of something like 600,000 people — very, very clean and touristy and certainly has a history dating back hundreds of years — buildings are generally very old but in the town center, restored — outside the center, not so much — grey, broken and old.  Streetcars must date back 50 years from the old Soviet Union.  Manfred suggested it as a good stopping point since I would get there at a decent time and the ride to Krakow the next day would be a good 6 hour ride.  I really only had time to have dinner in Wroclaw, some fresh pirogies assortment — 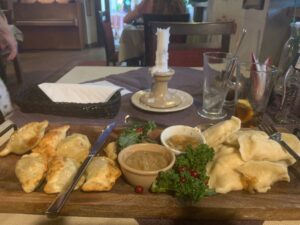 huge portion for only $8 plus a standard Diet Pepsi.  I walked the town square with probably 10,000 people enjoying the massive tourist area on a fresh summers night.  Its also a young persons city — lots and lots of millennials dressed in very western hip fashions.  But for me, it was just a stopping point to get ready for Krakow and Auschwitz, my ultimate destination.

The next day was to be divided in two parts; first was to wake up very early, depart the hotel and ride the 6 hours to Krakow — check into my hotel that I booked the night prior — drop my bags, change clothes and haul off to Auschwitz by 12:30 pm.  That was the plan. 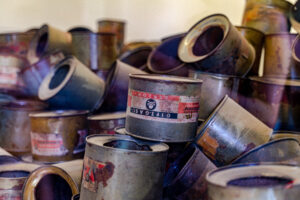 I did leave early — I did get to the hotel by noon — and I did ride fast.  Poland countryside is very uninspiring — could really be anywhere because its mostly farmland and rolling landscape — mostly flat.  I fought sleep too many times, but worse, it started to rain and I had to deal with that annoyance — that sucks.

Checking into the Sheraton in Krakow, I asked the reception about getting over to Auschwitz.  To be honest, I did absolutely no planning.  I really was not sure if it was a busy place — I guessed not, but I never thought twice about it. 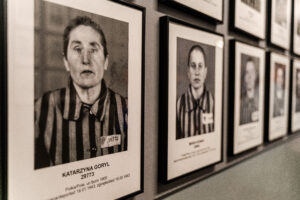 Apparently I was wrong — it is massively popular and super busy.  Tickets sell out days prior and they do release tickets the day of, but I was told that the lineup could be up to 3 hours and there are no guarantees that after waiting I would get tickets.  I really did not have any options because I have to move on the next day to Warsaw in order to keep my schedule – so I said that I would go and wait in line if that is the only way.  While getting ready, the concierge told me that I was in luck, the driver who was taking me to the camp was able to secure a ticket via a Facebook page and I did not have to wait in line — the drive was 90 minutes and I would get there by 2:00pm — ready to take me for the 3:00pm tour.  I knew that the concierge was not shitting me — she was too sweet and not looking for anything as a benefit. 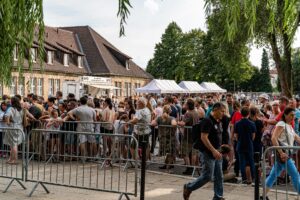 I got in the car, the driver told me that he was super lucky.  Someone was not showing up for their 3:00pm time and the company posted the extra ticket on Facebook — he saw it and grabbed it.  The ticket was still only $15, but it was prized as I saw later — when I witnessed hundreds of people in a dense long lines waiting for their turn to get a ticket in this very hot day.  I was so lucky.

The first part of the tour was by myself at Birkenau, the largest part of the combined camps — which accepted the rail cars, disembarked the Jews, moved 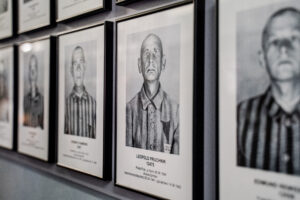 them along the line, incineration …  You get it.  Birkenau also housed a ginormous amount of European Jews in what I can only describe as a city of long unsuspecting barrack buildings in rows and rows and rows.  The perimeter of this facility is surrounded by barbed wired fences, towers for the German guards and yuck, it was horrible to see.  At the opening of the camp was the famous opening for the rail cars and the tracks are all there in their former hatred glory — you can see the front gate in the first picture on top of this post.

Birkenau is just steps from Auschwitz, the place where the actual killings took place.  I met the tour at 3pm, the guide had a sticker waiting for me, my driver and the guide shook hands and my driver waited 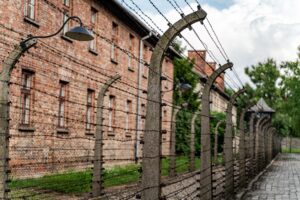 the 2 hours it took to complete the Auschwitz portion of the tour — he parked nearby — and had done the exact same drive more than 10 times in the past 2 weeks.  Its impossible to explain how many people visit this place, but I was totally shocked by the volume of visitors – I dont know why — but its not just a jewish thing — its toured by everyone from everywhere.  I really only went because it was on my route and I have a bit of a fascination with it — but in no way would I expect the volume of visitors there — it was packed full.  I can now see why they limit tickets and tours. 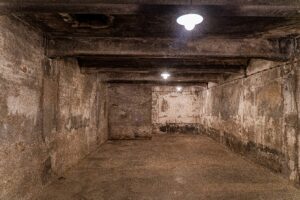 Ok, so all I can say is that its super sad and shocking on how big these facilities are.  If you think in terms of football fields, I cant tell you how many make up Birkenau, but its lots and lots of football fields large with nothing but wooden barracks and buildings.  The realization that these facilities are purpose built for only one reason – to exterminate people hits home in seconds.

Auschwitz is a bit different — its a few dozen very large brick buildings lined up in rows also surrounded by barbed wired walls and gates.  We toured the buildings in somewhat detail — at least 2 hours worth of stories and explanations on what each building was for.  I wont go into 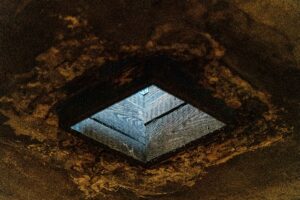 it now because its so gruesome, but you can imagine or read about it.  They kept the facility exactly as it was found in 1945 and that is the great part — you really dont have to imagine too much — its still the exact same.

I will say that they did display some horrible exhibits like piles of shoes, glasses, clothing, hair and anything that these humans were robbed of — excluding their dignity and humanity.  One can image the setting and I was so moved.

We did see the gas chambers, the furnaces and all that shit which I hope to remove from my memory for now.  I will keep this post short because I really dont like thinking about it.  The size, the scale, 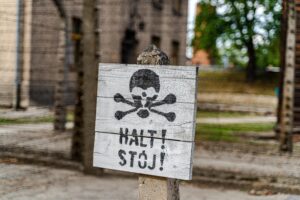 the torture, and how the lives turned into non-humans — its all there.  On one hand, I’m glad I went to see and on the other, I am sorry to see.

I took a day to write this post because I was so mad yesterday even though it would be best to write this post the day of the event.  I was mad because the democrats in the House of Representatives are assholes to allow that fucking idiot and immature bartender from Queens be the face of their party and spew shit about Jews, the holocaust and Israel — and even worse, compare some uninvited illegals bringing fake kids across the border into the USA with this horrid genocide.  Her and her merry band of fuckheads exploit their ridiculous hatred by invoking ignorance.  I am absolutely not a religious person — like the least you’ll ever meet — 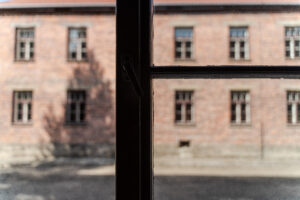 but I have morals — and these fucking congressmen should be shown the door — but the leader of the democrat party — along with their Jewish leader of the Senate — are spineless and only want dirty votes.  After visiting this tour, I was resolved to give money to fight these fuckhead morons — so their hate and rhetoric does not evolve in America.  Thats enough of that.

An important day for me.  Places like Rwanda, Cambodia, Auschwitz, Kurdish and other atrocities should never happen again.