Gosh, I had so many things to talk about today during my ride from Orlando to Atlanta.  What was supposed to be a 7.5 hour ride turned into 11 hours.  Why?  Miserable Atlanta traffic, thats why. 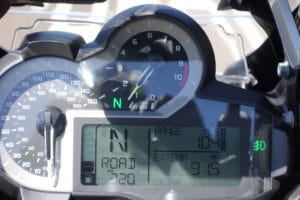 Every time I go through Atlanta, using I-75, I get whacked with traffic.   Virtually 100 percent of the time it happens.  Today took the cake — just outside of 100 miles from Atlanta, the stop-and-go traffic hit hard and took about 4 hours just to go that last 100 miles.  Well, thats bad right?  How about in 90 degree humid weather on a motorcycle with a full-on heavy duty motorcycle outfit — take it up a notch.

That said, I have to do an advertisement for 5 Hour Energy for a second if thats ok.  As usual, by noon, my eyes were rolling behind my head — I was seriously about to sleep again while riding.  Like I have said before, the highway is intoxicating and so relaxing with noise, vibrations and often straight lines, I get dozy — often. Too often.

So, at noon I stopped and got a 5 Hour Energy — Berry favor if you care.  OMG, its a miracle drug.  I guess its a huge dose of caffeine, but whatever it is, man, it works.  I was totally lit up the rest of my 7 hours on the bike.  How is that possible?  Serious, how can a little drink like that do such a great job at keeping me attentive and not wired either.  I feel fine.  I have to ask Google about this one.  I bought another bottle late in the day for my next ride and this time I bought the EXTRA.  I hope I don’t pop a blood vessel or evoke a heart attack on my next ride.  Amazing shit. 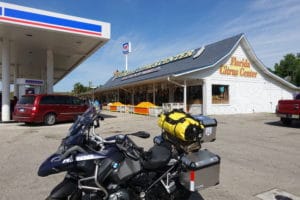 The worst of it was just prior to that, I was real happy with my ride.  No issues to discuss.  No almost near misses.  No mistakes.  Just a nice ride on the Florida Turnpike and I-75.  Well, as good as it can be. Every classic snowbird, red neck and lots of truck drivers shared the route with me. 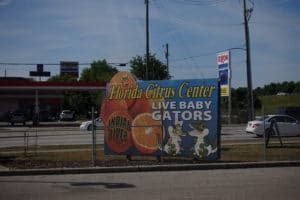 In fact, I think the birds are flocking north now since I saw tons and tons of motor homes and elders from every part of the North-East; Ontario, New York, Pennsylvania, Ohio, Michigan, Illinois (not NE I know), … sharing my route.   I’ve done that route by car probably 50 times over the years — usually terminating up in Toronto.  This time, its going to be a bit of an erratic tour — in and out of I-75 and local roads — turning west and going somewhere — not sure yet.  Thats the fun of it.

So before hitting the traffic, I was going to call this post — “Can’t Chew and Ride”.  I had a huge amount of to-do’s with things I want organized and working for my ride — mostly electronics — while I was on the bike and some were resolved — others not.  That occupied my mind while riding.  Just a note, its never a good idea to drift off with thoughts on fixing electronic toys while on the road traveling at 75 or 80 miles per hour on two wheels.  Every time I tried, I really came back to reality that I need to focus on my riding.   But that did not come with some struggles.  My GoPro still is not working and bugs me.  After setting it up for a week — 3 weeks back — it now does not work — aka Bummer. 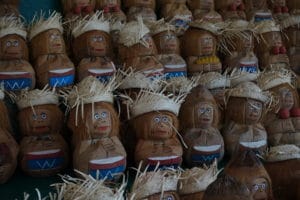 I guess I was also upset riding because I really could not focus on getting some good pictures shot.  Ahhh, so many opportunities to get some great shots.  So many losses.  I love reading billboards and the nonsense messages on those displays ranging from messengers from God to Life or non-Life lessons to funny local shit and often local farms or stores prodding me to turn off — but I have to fight it off.  That could be a project for a budding photojournalist.   I could have taken pictures of the minions of motorhomes on the highway just lined up traveling north.  The great local highway shops and tourist attractions that make tacky a nice word.  People, yes, people.  I could shoot everyone when I pull in at the truck-stops and make a book of The People at Truck-Stops.  So many opportunities and my mind was scrambling over how to fix my electronics and stuff.  I need to learn how to do both because this trip should be about journaling in photos my experiences.  I’ll work on that.

On the positive side, I did get my iPhone talking to my helmet speakers — A+ there.  Had music the entire journey.  But again, not without incident.  I put in my ear plugs this morning just after leaving the hotel in Orlando.  Guess what?  I could not hear the music.  I though that it was broken again.  Rats!  No music — bad configuration again!  Nope, I pulled over and pulled out my ear plugs and Oh Yah…  Music.  Those ear plugs are amazing.  I also got my GPS working — hooray — to track my route throughout my entire trip.  It publishes the route on a private web site.  Happy about that achievement.  Need to get that messed up GoPro working next.  I hate GoPro’s.  Seems like everyone knows how to use them — for some reason I fuck up all the time and find the UI a piece of shit.  Oh well, we’ll work with it — I’m on a mission.

So I’m here now in Atlanta.  Hanging for a day because its going to rain tomorrow.  Then off to Porsche for my adventure at the Experience Center, 11am two days from now.