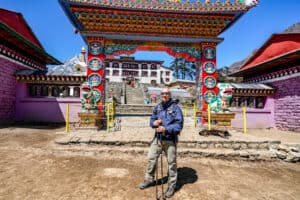 I really was not going to write about todays hike because it was really short but it did take us up another 1,000 feet to settle at 14,000 feet and most important, we are well above the tree line.  The hike was inspiring because we were constantly surrounded by a 360 view of mountains that are massive by any scale.  To put it into perspective, since we are at 14,000 feet, the peaks around us are between 20,000 and 28,000 feet and those are the largest on earth.  I kept looking ahead at the peak of Everest which is around 29,000 feet into the sky but it is mostly blocked by two other ranges, both around 28,000 feet high, making them the 4th 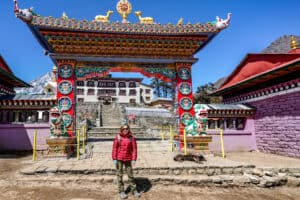 and 5th largest on planet earth.  Not much more needs to be said.

Just before leaving our last outpost luxury tea house, I had to take a dump and really postponed it because its torture shitting while the surroundings are so cold.  What the heck, I did my duty but of course, our toilet does not flush because I as I said, their was no running water in our room or anywhere because the the pipes are frozen — permanently.  So I poured a bucket of water into the toilet after my deed and the rest is our generous proprietors problem.  Lets just say I left a gift upon my departure. 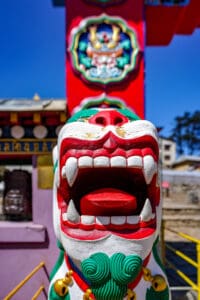 And when you think it could not get worse, we arrived at our new tea house today in Pheriche.  Walked into the main sitting area/dining room/lounge, basically the only common room and it actually did not look so bad.  Plywood floors and walls coated in a dark nutty stain, orange drapes, a scene like one would expect from this type of joint with posters of Everest everywhere, famous trekkers, stickers from all the tour outlets — and that’s inside our quaint lounge.  Paula was freezing and I was doing just ok.  Outside I would guess it was a damp biting below zero something Fahrenheit.  We sat for a while waiting for our boys to come with our bags — they had stopped for lunch somewhere.  In the mean time, we got pretty bored.  The local Wifi Internet was down — and let me explain, you cant get cellular data up here so the locals have some kind of bad radio, point-to-point wifi system that you buy a package.  It goes in and out and like everything up here is unreliable.  Last night, we had no electricity for some unknown 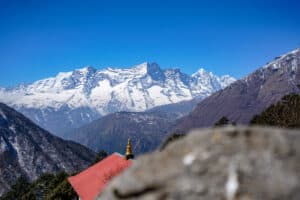 reason — which I think I know… Infrastructure here is crap for a good reason — we really are in the middle of nowhere.  Anyway, after a couple of hours, our boys arrived.

Paula and I got our keys to leave the somewhat livable dark lounge to see our suite which is number 10 for the next 2 nights which include another acclimatizing day.  I 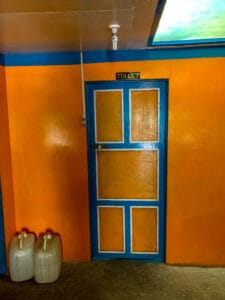 don’t know if the word shock is enough to describe the rest of the lodge.  Cold, no freezing concrete floors everywhere and dark walls lined with room doors every 8 feet or so.  Two shared toilets for our disgusting, disturbing, loud and obnoxious Chinese guests we are sharing our night with.  Toilets are just a hole in the designated restrooms — no running water to wash hands, that relies on wet wipes and of course, no toilet paper.  Just a hole on a concrete floor and no heat.  We now go to our bedroom.  To enter, you really have to unlock a horizontal deadbolt system with a padlock.  We open the door and it’s a room about 70 square feet in size with two single beds, no reasonable covers and thats it — oh, the comforting fucking freezing concrete floors.  I really don’t mind all that, but again, no heat and were in a concrete jail cell when its likely going to be 10 degrees Fahrenheit tonight.  Our sleeping bags are fine, but trying to get up in the middle of the night, open our door into a pitch dark hallway and walk to the restroom, take a piss in a smelly hole, then find a wet wipe, get back to the room by navigating with a headset flashlight and get motivate to go back to sleep while shivering because your skin has been exposed.  We will be sleeping 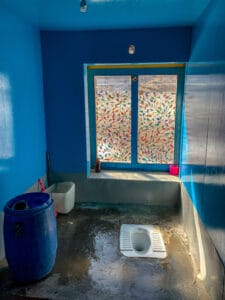 in three top layers, two bottom layers and socks along with maybe a hat.  We have two nights here and it only gets worse as we go up to our next two altitudes.

At 6pm, it was sunset, or in photograph speak, Golden Hour, where the mountains turn orange along the peaks.  Any normal time, I would be incredibly exited to jump out and take a few pictures since its the best time of the day to shoot.  I looked and looked and looked trying to get the courage to go outside again and get hammered.  Finally at 6:15pm I decided to go — I had to because when else will I me in this insane mountainous place like no other in the world.  I went to the room, grabbed my camera, ran out just to find out that I was like 5 minutes too late — it was now dark out.  All that for not — shit — and worse, I came back like an icicle which took me a good 30 minutes to de-thaw.  Tomorrow, I’m out at 6pm sharp for golden hour — at least thats the plan.

Had dinner, a questionable mushroom pizza and vegetable soup, got back to this post and Paula is reading.  Just 4 more days and we make it to the top — our goal — Base Camp.

I will keep motivated — its hard.  No internet, no running water, no heat, no real crapper, no showers, little change of clothes… Hygiene is starting to wane — day by day.