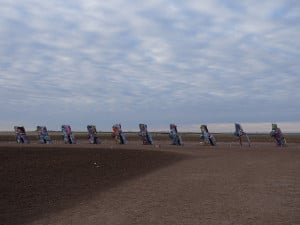 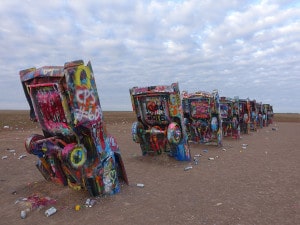 “Cadillac Ranch”, but lets go with it.

The second thing that Amarillo, Texas is known for is The Cadillac Ranch.  In 1974, just outside of town in a farm field, a wealthy business guy and his buddy had opened a public art exhibit of vintage Cadillac automobiles.  The idea was to share this idea that art is living and breathing.   Think of it like — If they build it, people will come.  It works.  Click on any of the pictures to enlarge, its worth it.  Curious people in automobiles with license plates from all over the country were lined up to visit this exhibit in the field. 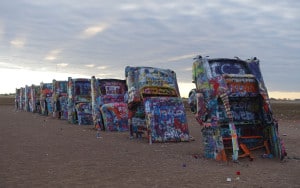 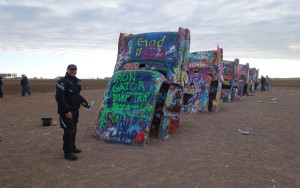 they are part of the exhibit.  I had to play.  I went over to the Home Depot last night and got two cans.  I had gone to the site yesterday evening, but it was too busy with crowds of people so I decided to get an early start and be the first to the field.  On my way out to Santa Fe, New Mexico, I passed the Cadillac Ranch again and did my deed.  Hooray! 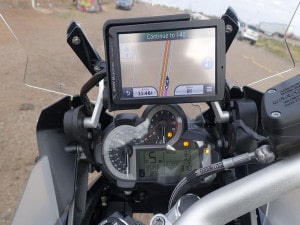 After playing for a while and taking tons of pictures, I was happy.  Good start for the freezing day.  When I first got on the bike, the temperature was 27 degrees F.  After mounting my bike onwards, the temp was a warm 31 degrees.  Help.  Lucky after yesterday I dressed the part.  I wore 3 layers of shirts, long johns, a neck warmer and put the handlebar heaters at full.  Ok, ready for a hard day.  The drive was only 4 hours so it was fine.  After a few hours, the temp was almost 50 degrees.  Nice.  I rode some just memorizing side roads with plateaus that seen to flow everywhere for miles on end.  Pictures to follow later.

One other thing I saw which made me stop along the highway.  It was a ranch with 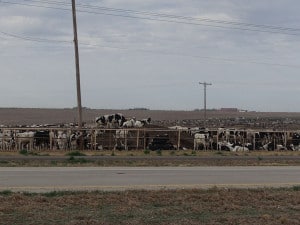 what had to be many thousand head of cattle.  No shit.  These cattle went on forever and no way I could get a picture which gets the entire peripheral image.  Too bad I did not have my wide angle lens on my camera.  Trust me, it was something to see.  Texas and cattle is not a tale.  This ranch was the biggest I had ever seen.

I finally got into Santa Fe at around 3pm.  I settled in to the hotel and walked into the village.  Think of the village as an area about the size of a football field surrounded by adobe buildings, each with either art, jewelry, nice leather clothing, restaurants or indian chachkas.  Real nice.   Mostly high end stuff and lots of hand made stuff from local artists.  I have been to Santa Fe before and I thought the same —  Nice place to visit but only good for a day and half.  No more.  Not exactly sure where people come from to visit since its a bit out of the way?

I ended up buying a few things for Paula.  All hand made silver.  Their is an area in 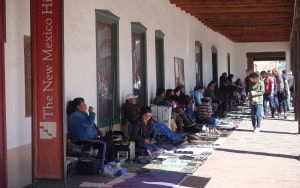 the center where they offer a lottery for local native indian artists to hock their goods at very reasonable prices.  My guess is that their are about 40 indians lined up — each with their jewelry goods on blankets.  The place is crawling with white people — the buyers — many hoidy-toidy people but all types.  I met some people from Montreal and another from Boston.  Certainly busy season is the summer.  I’m told that this time of year could see snow.  Thank the lord that I missed that. 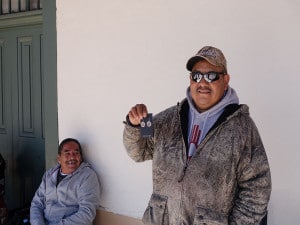 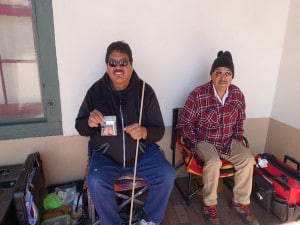 earrings I had just bought.   Seriously funny.  They were good sports.  Check out the guy on the right’s teeth when he smiles.  Clearly he is hungry for the buck and does not like to smile.  I like that guy.

On to dinner at a local Mexican restaurant/greasy spot.  Loved it.   Seriously authentic and huge portions for little money.  No fancy place for Phil.  That defeats the experience.  I love eating at tourist traps and local places where locals eat.