I really have to say that today was a great day.  One of those rare days where everything really comes together and you feel great.  I will jump right into it — why not?  Get to the best of the day’s event.  So I had read that Fort Worth houses the Bureau of Engraving and Printing for the United States — translation, half the money (bills) printed in the entire USA come from this factory.  I had to see that, so I planned around visiting Fort Worth, Texas.  Yes, stupid question, of course I did go to Ft Worth just for this tour.

Now for the crazy part.  No pictures allowed.  When you enter this enormous factory, you have to put your cell phone and camera into a locker.  I was so pissed – no pictures taken inside.  I really wanted to remember this tour.  To say that security is tight would be an understatement.  Leaving the parking area is a double fence with barbed wire and about a 20 foot space in between each of the two fences and concrete deadman floor — aka the German-Russian eastern wall when it was up.  Nobody is going to penetrate this place with x-ray, body scan and a hardened visitor entry area.  The taxi driver who took me to this facility had never even heard of it, but once we got there, about 200 or more visitors were there already — not exactly a secret.  Friends, this place ranks among the top 3 factory tours I have ever been!  Next time you go to Dallas, take the extra drive to Fort Worth and check out the BEP.  I don’t think you will be disappointed if your into this kind of stuff.  As an extra bonus, 3 times per year for a couple of weeks (I was there during March Break), the actual staff for each department set up kiosks to explain their tasks — and bring examples — i.e. plates for $100 bills — although under tight security complete with a police around it.  That was double amazing because they were friendly and you can ask any questions you wish.

Man, what a great experience.   I was on cloud 9 while there.  The entire factory is set up as a tremendous visitor opportunity.  You walk the entire process which is glazed from atop the factory floor, from the very beginning to end with an accompanied recorder explaining each step.  Only one step in the process was covered up.

BTW:  The factory produces $5 billion of bills each day and holds $1.5 billion in a vault.  Another crazy fact is that 70% of all $100 bills printed go outside of the USA to different countries.  Last, if your still there, dollar bills are not made of paper as we think of it — its made with 70% cotton and 30% linen — mix into that color scraps, 3D ultra violet strips and a secret ink printing method which has images imbedded in the paper but can not be seen without UV light.  Tons of technology and craftsmanship mixed together goes into this production.  People still carve the plates by hand — mind blowing, right?

So backtracking, I left Austin first thing in the morning.  The ride was nice, but the temps started to drop.  Definitely my routine is getting nailed down.  After getting outside the garbage traffic and construction in Austin, the drive was pretty simple; one or two highways up to Fort Worth.  I stopped at Denny’s for a quick egg snack and coffee then back on the road.   I got to my destination, the lovely Homewood Suites by around noon —  All set.  Got cleaned up — headed off to the BEP.  I decided to take a cab because the weather was threatening rain and cool.  Sky was cloudy and grey from the time I left Austin until I got to Ft Worth which is kind of lame town.  Temp on the bike to the right shows 61 degrees.  I thought that was cold but I can see that is nothing… Freezing days to follow. 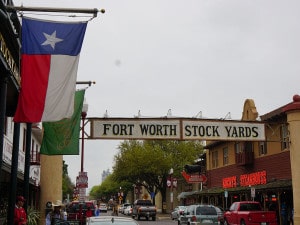 After the BEP tour was over, I took the same driver who came back and headed to the Fort Worth Stockyards.  Another place that I had never heard of prior, but it was kind of fun.  Not enough to plan a trip around, but certainly kept me busy and was an experience.  Think Texas Cowboy town.

I think it can be compared with a mix of Pioneer village and a farm expo mixed with a rodeo exhibition.  It houses the Texas Rodeo Association and their is a big area where they do rodeo shit.  I don’t know but they were inside an old building doing rope things with horses and cattle It’s open each day and certainly was busy — probably because its March break with tons of kids and adults.  It is what we call a Tourist Trap.  But I didn’t mind.  Learned a lot about Texas.  The reality is that Texas is full of cowboys who heard cattle — still today it stands true. 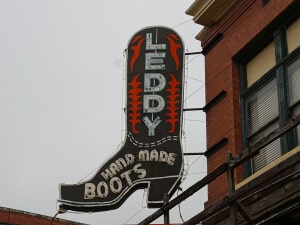 What blows my mind is how many Cowboy boot and hat stores and super stores exist in Texas.  I saw tons of people wearing the boots.  Its not a gimmick for local Texans. From the time I started driving into Texas, to each 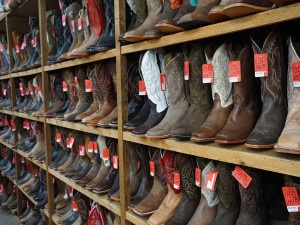 town, highway and byway, their is another massive boot shop hocking cowboy boots.  I really am so tempted to buy a pair but also know that I would never use them.  Not the cockroach killers with the sharp tip — I favor the shitkicker square toe jobs.  They are pretty neat.

I did buy two items on my afternoon in the Stockyards.  First was a horseshoe that was actually used by long horn cattle that go up and down the main street 3 times per day.  I paid $3 and it is a bit smelly and dirty.  It my lucky shoe. 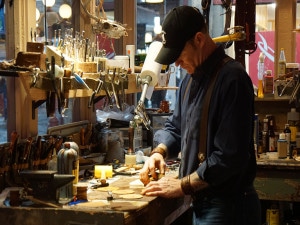 The other thing I bought was 4 coasters.  But not just any coasters.  Their is a leather artisan who was making belts in his shop.  I watched him tap and carve individually into a belt he was working on.  I love that craftsmanship.  I don’t need a belt though.  So I saw some leather coasters with longhorns embedded in them and they were $3.99 each.  I asked if he would carve some pattern into these coasters with his tools.  He agreed and I was happy.  It took him about 15 no nonsense minutes and I got 4 custom coasters for $16 — how sweet.  Click on the picture of the leather guy to the left to enlarge — he is the real deal.

About 6pm I decided to have an early dinner.  The taxi driver told me that the 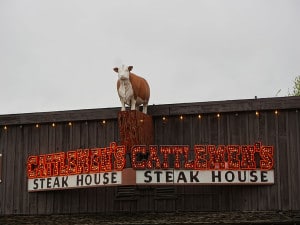 Cattleman Steakhouse was a tourist favorite.  Sure, why not.  Texas equals Steak, right?  Yup.  Way too many steak houses to chose from all over Texas.  Just in the Stockyards were 5 or 6 choices that looked legit.  I settled on the Cattleman for bragging rights.  Steak was ok, not great.  Ambiance was ok, not great.  Location and history is probably bigger than the food but hey, its something different.

By the time I got back to the hotel I was drained.  Long day.  Amazing day.