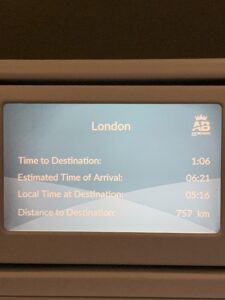 It’s now time to move on to the second of three continents; Europe.  I now on a British Airways flight to London and it’s really a gnarly feeling that my plan is super loose until I get to Estonia, at the Russian border.  More about that later.

I finished my first ride from the USA to Canada starting in Boca Raton, home base to Toronto, old home.  For some strange reason, WestJet, the Canadian carrier has the least expensive transit crossing the Atlantic to Europe for transporting a motorcycle — by a lot. I saved probably $3,500 by riding my bike to Toronto and shipping it from there compared to shipping from Florida or any US port – I also did not mind the warm up ride on my new 2019 F850GSA with less than 50 miles on the odometer — that helped make the decision easy.  To do so, it was somewhat a routine ride for me because I have driven this route probably 50 times by car in the past 15 years, never by bike.  But who cares, its a walk in the park to ride the somewhat boring passage through Florida, Georgia, Tennessee, Kentucky, Ohio, Michigan on Interstate 75 and then into Canada through Ontario on Highway 401 — finally ending in Toronto.  I have to admit, after my last 7,500 mile ride crisscrossing the USA which ended just 6 weeks prior, I was a bit tired some days — whatever — its all good, it could be worse.

Crossing the border into Canada meant that I now needed to finish a bit of the preparatory stage.  It is really my last stop 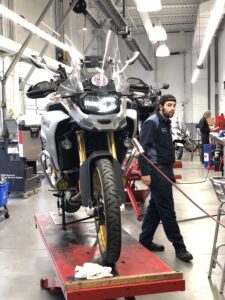 before the complete unknown begins.  I had scheduled a service by the Toronto BMW Motorrad shop.  John the mechanic was an unusual man who thinks that all his clients are his students.  The way he talks to a customer is with the bent of a man who has had 30 years of experience repairing and maintaining these BMW trinkets.  I asked him to teach me to lubricate the chain and how often to do so since every bike prior has been the unmaintainable shaft drive type — that turned into a full-on 5 bell alarm, in a nice way.  He was going to teach me every aspect of the process in tremendous detail with always an added punctuation mark.  He was not belittling or anything, but he was arrogant, in a nice way.  You must do it this way or else.  But knowing me, I can only turn my brain on 40% when I am not fully interested… I think I got it.  My little problem with the cruise control turned into a demonstration on how to ride the brake lever as if I just got my motorcycle license a week prior.  Oh well, I like John, he’s got spunk.

I also needed a few shirts, clean up the bike and washing of dirty clothes.  Most of all, catching up with some old friends like 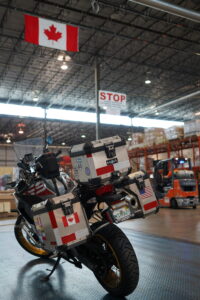 you Sager, Habert, Howie and Igal.

I can’t say it was stressful, but it was certainly new, the process of taking my bike to the Toronto airport cargo area and loading it for transport via Westjet airline on July 21st to London, Gatwick.  That experience took longer than I had thought but thankfully I had my paperwork in order.  To get it done, I had to ride to staging area 43, drive up the ramp into this never ending bonded warehouse with hundreds of fork lifts buzzing around doing something — like in every direction with the sound of horns beeping every few seconds.  These derby drivers whizzed by me with only inches to spare and nobody looked back to see if they had clipped me — no, these are professionals, the unsung heroes of the back office distribution system.  What I’m trying to say is that these guys are recklessly organized on a tight schedule.  The giant box of a warehouse is dark, packed full of crates, boxes, pallets, machinery —  and it’s hot — the North East USA and Canada have been hit by a record heat wave — soggy, humid and stale heat.  I checked into the office, got my approvals, then waited until some mutant guy pointed me to move my bike to the massive scale built into the concrete ground.  Curiously, I had a secret guess on the weight of my two wheeled partner before my quiet friend took the official measurement — I thought maybe 550 pounds because I was not allow to ship the bike with luggage bags which themselves 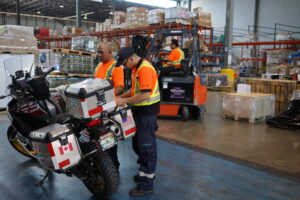 weighs probably another 50 pounds but I was able to pack the metal panniers on the sides and back with clothing, helmet and tools. Anyway, I was off, the bike weighed a hefty 298 kilograms, or 660 pounds with only a quarter tank of gas — What a pig of a bike.

After the weigh in, the customs guy walked over and took absolutely everything out of my panniers — like everything was inspected — no stone unturned.  I was surprised how detailed he was.  I pack super organized with all like items sorted into travel cubes, each labeled with the contents.  My bro was impressed by the organization — I was proud to share my technique.  Anyway, it literally took an hour to go through 3 metal boxes of maybe 100 of my personal items.  The next step is one that I am totally unfamiliar, taking the red cables off the battery on the bike.  I hate batteries after I saw Mr Pollack get a huge pop when we were 14 years old messing around with cars.  So I reluctantly got my pliers and took off the cables, wrapped 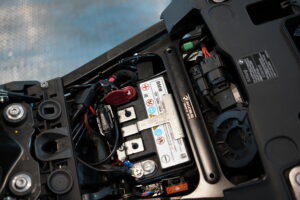 them with electrical tape, then put the seat back into place covering the battery again. Mission accomplished.  I then got the okay that it was good to go.  I got my paperwork stamped and the mutant took my bike on a fork truck somewhere into the abyss.  See you in London Gatwick somewhere soon Iron Monkey Butt Bike.

With the bike now gone, Paula was coming into Toronto that same night so we can start our journey together to London for a week.

So when I get to London, I really have little by way of plans – almost to the point of stupidity.  After doing these type of adventure trips, I learned a long time ago that it’s more fun to have a start and and an end — but not to get hung up on details in the middle.  In this case, it’s pretty extreme in that I will be crossing the entire top half of the European continent without a smidgeon of a route yet.  I know that I will be visiting Munich to see BMW, Stuttgart to visit Porsche and Mercedes.  I have a friend from my South American trip who would like to meet up in Germany –  and if I can — I will.  I will go to Haribo, the greatest gummy candy maker in the world.  I really need to buckle down and figure this out in the next few days.  Further, I have no clue how to cross from the UK to France through the tunnel?  A ferry?  No clue.  Fun, wow.

Most important when I land is to pick up my bike from Gatwick and figure that process out.  I have the paperwork which I received in Toronto, but I have no clue if that is enough — and where Gatwick is in relation to anywhere.  Normally, I just pop into a taxi and it does the thinking.  In this case, I’m the driver.  I made contact with a fellow who owns a storage facility near London and I will park the Monkey Butt there for a week or 10 days while Paula and I tour around.  Again, I need to get my bike out of customs, get over to this guys garage on the wrong side of the street and hope not to make too many mistakes with that.  Gosh, I’m in this a little over my head.

Time to put my thinking cap on.  Remember the 40% rule of paying attention — that might have to increase to say 70% — I don’t want to put my brain into too much discharge though.  Pull up my pants, I guess its a big no-no with the WOKE people to say, “man-up” and get it done without whining.