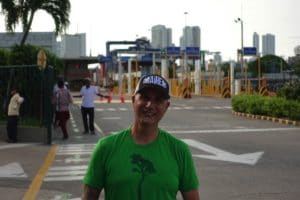 Today was a long day — basically watching third-world office workers complete very basic tasks in third-world time.  Does that make sense?  Ok, let me try again.  Today, I spent most of the day trying to get my motorcycle out of Columbian customs, there, better.  But its the minutia in the middle that is pretty interesting, or not that interesting.  I’m promised that MAYBE tomorrow by 6pm I can start collecting my bike so it can go to the inspections stage.  Every step is a port worker copying, printing, writing, talking on the phone, writing, yelling on the phone, writing — all in multiple copies and I just can’t put my finger on why this is all needed and I keep hearing “we don’t have that yet”.  Have what bro?  You have everything.  Said the last way…  One fucking bike takes up to 4 days to get released.  And crazy enough, all vehicles are separate and individual even if they share a container — all people and bikes have the same process.

I can relax and breath — Just kidding, this is the beginning of lots of similar events like these so its sane to just enjoy the ride.

A few days ago I really started to focus on the itinerary and thought to my self, why on earth does it take 4 days to leave Cartagena until we start our ride?  Well, today I learned why.  The process to get eight motorcycles, spare parts as well as a chase truck shipped from Austria, Germany, Thailand and the United States takes Columbian time.  And worst, all participants picking up these vehicles must be present and just wait at the terminal just in case someone requests us for some unknown reason.  Ok, moving on…  Like I said, practicing patience is a virtue and fun.

Working backwards now, why am I here?

Well, lets call today the jump day for my first “Iron Monkey Butt World Tour” leg, starting in South America.  Its been a long time coming.  I’ve watched countless hundreds of videos of adventure motorcycle riding to the most amazing places around the globe — navigated by some hearty dudes and also some very nutty people with no social skills — crazy thing is that I am drawn to both.  For some reason, I just love the idea of following no known path to places that are meanness to me, other than they exist on a map and seem real strange, difficult to navigate,  grimy by our standards and present uncomfortable situations.  Anyway, after committing six months ago to this trip, its about to start.

I’m going to give you a backdrop of the tour route.  Yah, I’m getting excited thinking about it.

Now this two and half month motorcycle trip starts on the south-west coast of the Caribbean Sea in Cartagena, Columbia which is basically the top of South America and north-western corner of Columbia, near to Venezuela, sort of.  We then head down to Ecuador.  Then hugging the west coast of Peru all the way down — through the Andes mountain range through the top of Lake Titicaca (highest lake in the world).  From there, we haul out to Bolivia and make a mess of that country.  Then off to Argentina and again, hugging the west coast and amassing a long ride through the Patagonia region.  We are always cutting in and out of Chile and crossing the boarder many times due to the route.  Ultimately, we make it to Ushuaia, Argentina — aka, the Southern most town/city in the World.  From there, we crawl up to Tierra del Fuego and call it quits. 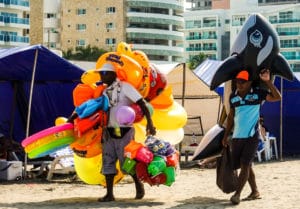 I got here a few days ago early because my family was in Costa Rica last week and they needed to get back to Florida.  So to kill time, I spent most of my time reorganizing my blog site, prepping and organizing bags and tons of people watching.   The Radisson is 99% South American crowd, tilting on the dirty side.  The beaches are filled with lots of tents and locals — even grown men making sand castles which I took some pictures but they had no talent so it would not show well — too bad.  Little room to wander without bumping into others.  The water is a bit sandy-mirky — at least here.  Of course, there is the Old Town which is the tourist area and that is filled with quaint, narrow cobble stone stores and shops selling straw hats, street food, trinkets and trash and the like — but its nice.  Its much bigger than I expected and is walled around by beautiful 20 ft high rocks — clearly it was a fortressed town.  I only went to the central town once to get a frozen yogurt fix.  Otherwise, the

best people watching is at the beach.

Since these few months are focused a motorcycle adventure blog, lets spend some time on that — shall we?.  Motorcycles ride the beach like a normal road.  I found this cool bike parked in the sand — I took the pictures and these 4 tough looking guys gave me a dirty look — I walked away super fast, almost like a trot.  If you click on the image, you can see that those brakes with rust and sand ground-in couldn’t stop that bike going at 5 mph — a death trap.  Lots of interesting bits, but I’m told that there are virtually no motorcycles larger than 200cc and most are 150cc.  To give you an idea of size, mine is a 1200cc — nice!  One last thing which I could not get a picture of which I found different here — there are tons of motorcycles and all beaten down with salt and time.  Uber is almost non-existent here — why you ask?  Individual drivers sell rides on these tiny, beaten, rusted and undersized motorcycles like taxis, but at a super low cost to make some extra bucks.  How do you know that a bike is for hire? The drivers carry an extra helmet on their arms which makes me wonder how uncomfortable that is to drive with and second, I never thought of one helmet size fits all?  Anyway, its cool to see entrepreneurialism among my people.

I have been waiting for my group to come which, they are now here — all 8 or 9 of us plus 1 leader riding with us and 1 driver with a chase truck carrying tires and parts.  I’ve met a few and they all seem to be fine specimens of Moto loving people;  3 Germans, 2 Americans (I’m of course Canadian, but they refer to me as American), 2 from Thailand and 2 from Austria, or some combination like that.

Oliver Kraft and Marc are our tour leaders — both from Germany.  I’ll fill you in on them in the future.  Both seem very experienced good and responsible guys.  I have to add that Marc at first glance looks like a skinhead or deeply disturbed para military dude — tattoos on his neck, hands, arms, chest and near skin head cut.  After spending a day with him, he is definitely not that — seems very decent.  That said, I’m dying to learn about his fetish for tattoos in those gnarly locations.

So lets wrap up this first post by saying that tomorrow should be interesting.  If I am lucky enough to pick up my bike from customs and pass inspection, I may need to put the bike together and worse, nobody is allowed to be with me in customs.  No clue what I will do if the bike was shipped as I suspect, in a few pieces for crating.  And for sure, the battery is disconnected and there is only a drop of gasoline.  I am definitely not happy about the notion of trying to piece together this bike without help — but that is what FaceTime is for and I don’t want to jump the gun — one step by one step.

Further, Marc who is very experienced in South American motorcycle travels says that once I pick up my bike, I should not travel alone — its not safe here.  This means that I will need to contact someone to drive in front and behind of me to the hotel underground parking lot and protect me should some small motorcycle come out with a gun and try to either rob me or bike hijack.  Really?  No shit — its true.