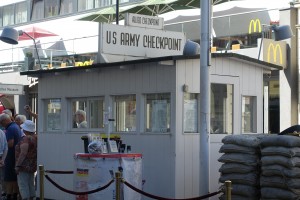 So if you were to ask me what is the most significant event in the past century for Berlin, or Germany for that matter, I would have to take a good month to noodle on that one.  Wow, so many events have occurred that are so outrageous and over 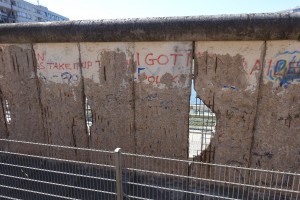 Think of your home town; say Toronto, Boca Raton, Cincinnati, Chicago or wherever.  What events have occurred which were monumental in your town you call home?  Well, if your in Toronto, that might include the last time the Toronto Maple Leafs won the Stanley Cup — big thing for that city.  Chicago, the day of the Valentines Day Massacre or the 1968 Democratic convention riots?  I don’t know?  Cincinnati, well who cares anyway.  These events all seem so lame in the scheme of things over the long run.  Most cities are pretty quiet and while they churn, grow or shrink, events rarely are so abrupt and huge in such a short timeline.

Now for Berlin.  I could write about WWI, WWII and both would be huge.  I could write about the plight of the Jews and that would be enormous in itself.  More books written, hollywood movies made and in-depth documentaries analyzed than anyone could study in a lifetime about those topics.  But if that was not enough, the people of Berlin faced one last adversity that is almost jaw breaking and unbelievable in the second half of the 20th century.  Their neighbor country decided to build a Wall in order to ensure the ideologues in the Kremlin do not waste a single human spirit and let them defect to the dark side — the West. 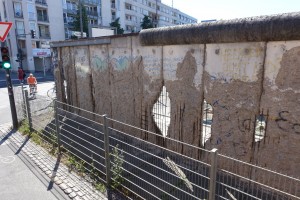 So on August 15, 1961, a totally random night, the Soviets started constructing  what turned out to be a 99 mile barrier that we know merely as “The Wall”.

Blows my mind!  If your interested, at the end of its life, their were seven checkpoints along the wall, each named by the U.S. Army alphabet call letters.  The first gate is “Alpha” representing the letter “A”.  The third letter, “C”, representing the 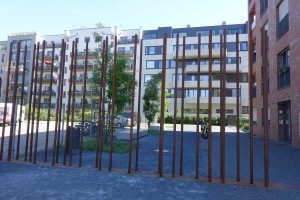 third and most famous gate is also known as “Charlie”.

You have to come here to get a sense of the implications of building a massive wall, complete with an inner wall, spikes in front, huge heavy metal rails barriers before the wall, barbed wire, watch towers, and more than I could possibly describe.  Just blows my mind.

Just imagine if you can, a random line built in the middle of your city with such decisiveness that friends and families who lived in this random area along that line, were arbitrarily condemned to a sort of hell.  Why did the Kremlin do this?  Well, over 300,000 people were fleeing the Soviet rule to go to the West over the previous few years.  To plug the hole, the Wall was built.  The funny thing is that the West; Germany, USA, Canada, Europe and the rest of the world just watched as this happened.

If you only come to Berlin for two days; first is Berlin art :), and the second day could be entirely viewing The Wall at various points.  Go to Bernauer Strasse and walk the mile or so park like setting and exhibits.  You will walk away shaking your head.  How on earth could the Soviets do this?  How could so many families be separated in the 1960’s, 70’s and 80’s — for a period of 28 years.  Just amazing.  Checkpoint Charlie is a tourist trap, complete with fake 1950’s gas masks, USSR medals, and nonsense including two fake American Army guards in front of the checkpoint taking pictures with tourists — akin to the Mexican guy under the Mickey Mouse costume in Times Square.  The exhibits are real interesting though.

Equally amazing, after the Wall was brought down, again, Germany just went about its business and rebuilt their lives and economy to be among the largest and arguably the most stable and powerful in the world.