I was really looking forward to this day for a while, but first I was so 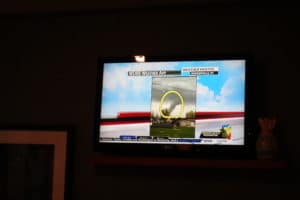 hyper-focused on the days weather.  From the time I got into the room last night I was watching the weather for today.  I brought up Weather.com.  Then I looked at WeatherUnderground.com.  Then my Radar apps.  All I saw was dirty and angry green clouds and rain on the radar for today and worse, all day.  Fuck!  Its 2:00am and I’m still torturing myself.   I don’t want to go out again in that shitty rain and wind.  So I think and I think and I think.  Finally I decide to stay in the same hotel another day and kill time — wait the weather out so the next day will be nice and I will enjoy myself without that RAIN. 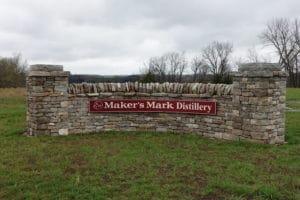 So I have a banana, watch some TV in the lobby and ponder while looking outside and decide to fuck-it, I’m just going to go for it and make the best of the day — rain or shine.  Dress for the weather and go for it in my full-on GoreTex suit.  Great, put in the co-ordinates in my GPS for my first stop, Maker’s Mark Bourbon Distillery which I read was akin to the Jack Daniels tour I did last year.  Fun. 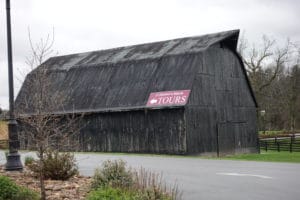 On I go, dressed for success — and so I thought except for one thing.  Yes it was spitting and yes it was super windy, but it got COLD, like real cold and in the high 30’s.  High 30’s in April — kiss my ass, thats nuts. and I froze a bit but fine, I was happy to be on the move.

The ride to Maker’s Mark was guess where?  Yup, in the middle of

nowhere.  How the fuck does a distillery in the middle of nowhere get so big?  I understand Milwaukee, Denver, St Louis or wherever has big beer companies in big towns grow to large business — but how does Lebanon, Kentucky get such a huge distillery?  Who cares, they do.

I went to the store and bought $30 of crap and really looked around and left — the wait for the  tour was 1.5 hours later so I was moving on thinking it would be nice to go with Paula there.  On another note, the storage of the barrels in massive buildings is impressive.  I would guess over 20 incredibly large buildings hold the inventory of thousands of barrels.  No picture would do justice on how many and how large the the buildings are that house the bourbon — on a huge piece of beautifully manicured grass land. 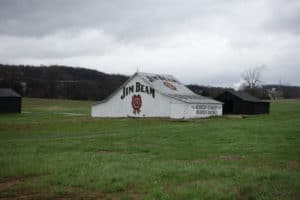 Next onto my other fun bourbon distiller, Jim Beam.  That was a 45 minute ride in the most beautiful god country of winding rural roads.  Yes, Jim Beam is nowheresville too.   I loved the brand and again, I skipped the tour like an idiot.  Paula now has an obligation to go with me on the tours.

My plans initially were to haul out another 5.5 hours to Memphis, but today was real hard work.  The rain subsided but the super high winds were pushing my bike around and it was a workout.  I was pretty uncomfortable on occasion, but I jut kept with it.  A few times I thought I was toast — with serious bursts of wind just pushing my bike from one side of the late to another.

While at Jim Beam, I picked a hotel in Nashville, called reservations and made it happen.  Just a 2.5 hour ride.  The decision was made to hunker down there at 4:45pm — an early day.  Good decision.  I need to recharge. 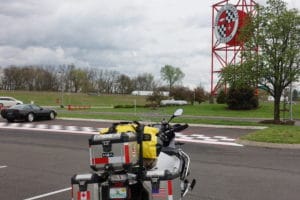 Along the way, I go through Bowling Green, Kentucky, home of the Corvette factory and while on the highway I passed the National Corvette Museum.  I decided to not let this opportunity go by —  so I find the next turn-off and buckle back to the museum.

Now, I’m not a Corvette guy — and I’m not sure if there is a

stereotypical Corvette guy but I will say that the place was huge and the people there were — well, lets just say, stereotypical.  Enough said.  I enjoyed the tour which for $12 was well worth it.  Its not exhilarating or anything, but 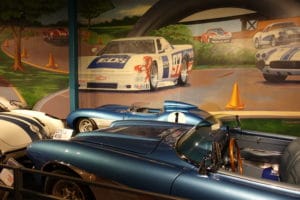 its well done, pretty big and interesting.  I wouldn’t go out my way to visit, but if your ever passing Bowling Green, KY, look it up, you’ll have a 45 minute happy break.