Feature Image is of the a very early old sign outside the MidPoint Cafe — replaced by this sign below: 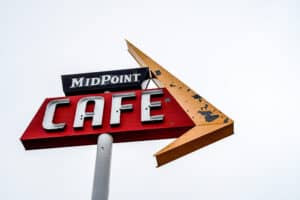 Today was very active and fun, full of varied experiences and that’s the way I like it.

I left my hotel — the infamous Fairfield by Marriott Amarillo heading towards the Iconic Cadillac Ranch made famous by Bruce Springsteens song of the same name.  Now I’ve been to the Cadillac Ranch 2 times prior over the years, so its not a new experience, but I would be crazy to pass up the opportunity to go back again — it really is that unique.  Ten or so caucuses of old Cadillacs are half buried in the ground on an angle.  Visitors are encouraged to bring cans of spray paint to create their own piece of personalized art.  I did this procedure on my last 2 visitations, but this time, it’s just a simple attendance.  I forgot the feeling — it’s such a happy place to see dozens of visitors from around the world at any one time to see the sculpture in the farm field — todays 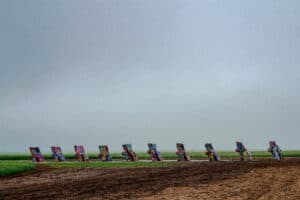 muddy and wet farm field.  We all know that some guy, a long time ago, donated the public sculpture along with the land to the world to share his vision of free art — located aside US40 (Old Route 66).  I met a family from Holland, a single millennial from Los Angles heading to Tennessee to visit his family — he was using a real old Polaroid Camera to take his pictures — so cool.  There was a guy from Oklahoma and tons of others.  I stayed long enough to chat with some people, take some pictures and walked away super happy.

Again, the morning weatherman said that there was no chance of rain and this time, my radar was so clear.  How wrong that was.  It did rain last night so my bike was drenched wet but I was expecting a somewhat grey day for half the trip, but no rain. Cool temperatures in the high 50’s but I was comfortable wearing a Marino wool sweater under my jacket.

Got on my bike and shit, the drizzle started — but a fine drizzle.  I knew when taking pictures of the Cadillac Ranch, the images would be great because the sky was basically white, covered in cloud.  That makes for a great shot and it did not let me down.  Problem is, after taking pictures, I had to ride in that grey drizzling sky.  I focused on riding somewhat slow-ish and safe. 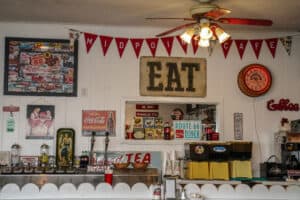 My next stop is 60 miles to the MidPoint Cafe which is literally the halfway point between Los Angeles and Chicago on Old Historic Route 66.  I read about this attraction just last night and although I have driven this route two times prior, I did not know that this cafe existed just off US40.

Old Historic Route 66 weaves its way in and out of US40 between Texas and New Mexico.  On some stretches, US40 did replace Route 66 and in other sections, Old Route 66 goes real rural for miles on end and then reconnects to US40.  The MidPoint Cafe lies just off of US40 along the old rural road which was Route 66.

So as luck would have it, just 10 miles before the cafe, the rain really started coming down with some passion.  Riding into the 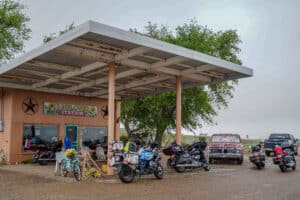 cafe, I saw my old friends from last night — the guys on holiday from Slovakia, riding Route 66 starting from Chicago to Los Angeles.  They too got caught just minutes before in the rain so they also were waiting out the storm.  We all went inside the cafe, had a bunch of coffee’s and chatted about our experiences and future drives.  The place was packed with visitors.  I looked at the guest book at the front cashier and it was filled with names from across America and the World — what a goldmine.  Really in the middle of nowhere is some shitty diner exploiting the fact that it is located in the middle of Route 66.  Big shit — but people were spending tons of souvenirs and I was mesmerized by that fact for an hour.  When the radar gave me the comfort that I could run for it, I did.  Next stop — Santa Fe, New Mexico.  I was going to to to Taos, NM but decided the distance was too far and away from my tour I would be taking in days to come. 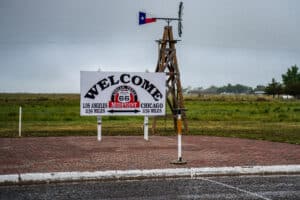 I happened on a couple of British guys on vintage Harleys just getting in while I was leaving the cafe.  They asked me to take their picture in front of the sign which says that this location is the halfway point and I  was of course happy to ablige.  They told me that they got beaned by hail coming in.  Regardless, I’m out of here. 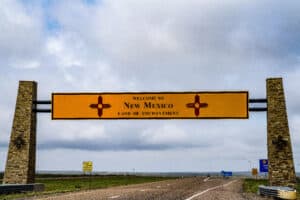 change to desert type landscapes vs the Texas lush landscapes filled with cattle farms along the highway.  The change was welcome and tells me that I’m entering The West.

The ride went quick towards Santa Fe and the sun came out beaming — but still remained cool in the high 60’s — low 70’s. Coming into town, I found out that I booked a cheap hotel on the outskirts of the main center town plaza — Thats fine, but the only issue is that the architecture is ugly and old.  The downtown tourist plaza is littered with art galleries, cowboy trinkets and trash, Indian jewelry and adobe buildings — I’ve been here a few times in the past so I didn’t mind missing the tourist plaza — but there is no chance for scenic or fun photo shots from my hotels location.  Tomorrow will be that day I guess.  Anyway, I rode downtown for an authentic Mexican dinner on my bike.  Ate too much, feel sick, bloated with 2,000 calories churning in my stomach — and now writing this post.