Been there and done that…  Yah, I’ve been to the Cadillac Ranch in Amarillo, Texas before.  I look like a stiff board in this picture — oh well.   Last time I froze my ass off and it was the high 20’s in March.  This time it was much nicer but still brisk — about 50 degrees.  I guess if you know what to expect, the magic has 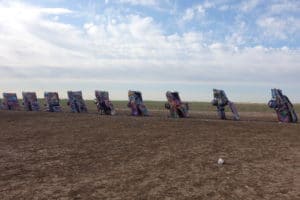 warn off but still, its a pretty neat site attracting tons of visitors daily.  Equally made famous by my boy, the Boss, Bruce Springsteen’s song of the same name.

back in 1974.  The idea was to have a non pretentious  interactive art sculpture where anyone can go on the massive farm-land property and paint their message on any of the 10 weather beaten 70’s Cadillacs which are anchored to the ground on an angle.  Neat idea.  The exhibit is surrounded by absolutely nothing but flat dirt land — my guess is about 50 acres or more.  This enhances the sculpture and basically the only thing you see — as far as the eye can see. 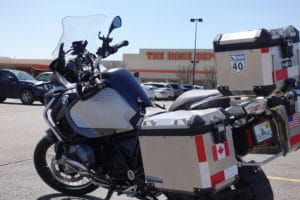 So yesterday in preparation, I went to the Home Depot and bought 3 cans of spray paint.  Today, I went over to the site and painted my message; IRON GATOR, FLA to LA on Bike.   Because it was a bit chilly, I rushed my paint job — sorry, I did

kind of a shit job but not to worry, in a few hours it will be painted over with another’s message.

From the ranch, I booted over back onto I-40 and Route 66 heading to Albuquerque, New Mexico, my next stop over for the night.  Thats about a 4 hour ride.  Wind was definitely down and like an idiot, I dressed as if it was going to be an 80 degree day.  I kind of froze my ass but it was fine, my seat and handles are heated.  The ride was just beautiful in a funny way. 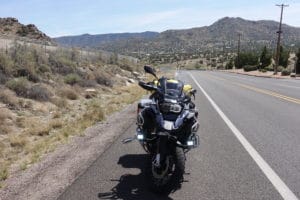 It seems to me that once you enter into New Mexico from Texas, the landscape changes to that of a desert with rolling hills.   Not sure how that happens?  Texas is lush and full of cattle farms and New Mexico is dry and desert like.   You would think that the folks in charge of defining the boarder for New Mexico back in 1912 would have fought harder — Like get just a bit of nice arid land and don’t just give in and take all the crap.  Where was the Donald back then?  Traffic along the route was scarce which was real nice.  I coasted at about 84 mph in the 75 mph zone during long stretches. 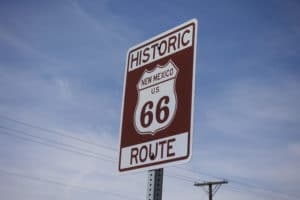 for various periods.  That is always a thrill to know that this was one of the busiest highways in America at the dawn of the birth of highways in the 1950’s —  That’s neat.

Finally,  while I may not be the biggest fan of Albuquerque — at least 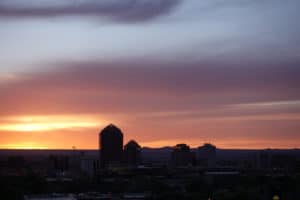 as a tourist site.  I’ve been here 3 or 4 different times and generally I try to bail to Santa Fe if I have to come this way…  The town is not overly interesting, has way too many Native Indian and Mexican mostly drunk vagrants roaming just about everywhere…  But the one thing that this town is known for is its red mountains and gorgeous sunsets.  Take a look at this image of the Albuquerque skyline I shot from the rooftop of my hotel.  Nice.