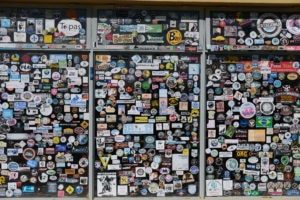 Feature image is of the Eg3 Gas Station and Mini Mart — located in the middle of nowhere, Patagonia, Chile.  Yes, I did drop a Iron Monkey Butt sticker there — check at the end of this post to find out where…

Yeah , I’ve been busy and disrupted by lack of Internet coverage.  Its been pretty hard riding and just when I thought the trip was getting boring and slowing down — well, the opposite happened.  The trip went haywire and we hit the gravel and had long days.  The fact that Internet 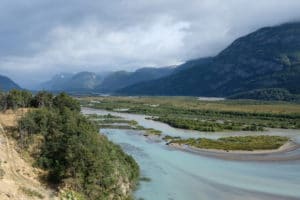 coverage is a luxury and not a utility is really hard to get used to.  But, its the deal.

Since my last post, we have stopped in; Coyhaique, Puerto Bertrand, Gobernador Gregores, El Calafate, Puerto Natales.  Not exactly household names for sure — many stops were really difficult due to their remote locations.  Now I forget where is where, but at one stay, in Puyuhuapi, the town with its 100 occupants had no restaurants, no bread and basically nothing except cookies.  Other locations were just as bad in different ways — the usual cold and grimy showers, limited good food so I eat crackers and cookies, dirty carpets, cold rooms.  So who cares, we move on. 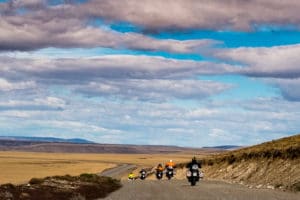 Along the way, I ran into a car on a super remote road — or we can call it a trail — but its a bonafide gravel road with heavy loose gravel.  I was hauling and finding the best path to ride — it was on the left side — a car came from around the blind bend and I tried to get into the other lane but the super heavy gravel in the center had other plans — I bit it and dropped my bike, scratched the car and either broke my toe or did some ugly damage.  It was the first car passing in hours so I was stunned when going around the corner it showed up.  My toe hurts like stink and looks bad.  I just need to get through it.  We traded insurance and I moved on.  I really did not care about the car, I just cared about my foot which was a mess.  It was swollen and purple.  My bike is bulletproof and fine without a scratch.  Dominico, our guide helped me while he was following from behind in the 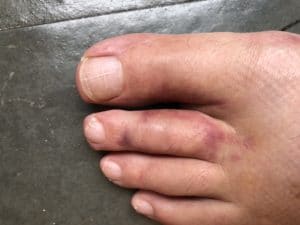 truck.  I made it an extra 5 km to the Chile border and then I gave up.  I could not even change gears without severe pain.  I had to go in the truck for the next 2 days while my foot or toe repaired enough to get it going again.  My bike was loaded inside the truck.   Enough of that — I got back on the bike and moved on with a purple middle toe which is likely broken.  Still kills today when changing gears. 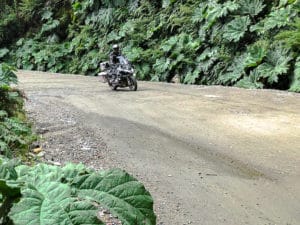 For me, the gravel as I have said is difficult to get my head around.  I have never dropped my bike other than the time mentioned above on gravel.  I few others, in fact, have dropped their bikes for sure, but in general, it’s been rideable.  I just hate it.  All notion of traction is gone.  Martin loves the gravel and wants to head to it on any chance — if given the choice and two paths, I will always take the paved — Martin, the gravel.  If I have to go on gravel, like yesterday or tomorrow, of course, I will.  No choice.  Optional riding on gravel — no.

Yesterday we went to the Terra del Paine National Park in Chile.  Probably the most famous mountain range in South America and if not that, in the top 3.  The 3 peaks of the main mountains are very sharp, 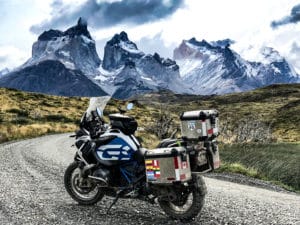 hard, rugged — or call it anything you like — it is distinctive and very popular.  See the picture and you will get your own impression.  Riding was on gravel through the 100 km road inside the park and it took us from one entrance through to the second entry in a circle around the main attraction — mountain range.  Paula and I stayed just outside the national park a few years back in a 5-star and most spectacular architecturally built lodge which was eco and camouflaged right into the landscape.  So impressive was its design that from 300 yards, you only saw the field and would not see the lodge because it was so built into the land.  The ride was fun, my toe killed but the outing was a full 300 km 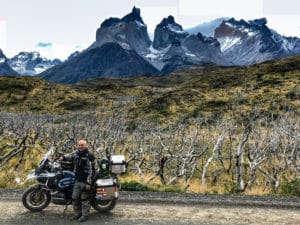 day and definitely some hard work — but rewarding.

I can really skip the last week — mainly because I cant remember details — thank you South American for your bad internet coverage — but today we rode from Puerto Natales, Chile, a small town really just there to play host for guests to the Torres del Paines National Park.  Nothing to speak of.  It was nice and had some nice outdoor clothing shops but strange enough, the entire town did not have internet cell coverage — neither did our hotel — aka Painful.  Our destination today is a super small ghost town called Cerro Sombrero with maybe a few hundred people — dead center in the flat and desolate Patagonia countryside.  I think there may be some oil people here but who knows, its a ghost town to me.   We did have to cross the Malaga Straight on a ferry with our bikes into the Tierra del Fuego region.

Patagonia is a massive area covering Chile and Argentina.  It has many faces and images from white-capped mountains — 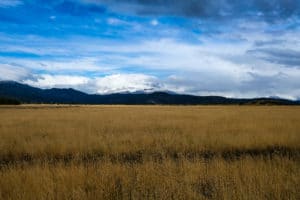 continuing in the Andes, through to flat desert lands to rolling hills with small mountains — or any combination thereof.  No matter what, the sheer size is impressive and takes at least a week of riding just to cross it — probably 2 weeks.  The beauty never gives up and although I probably took a few hundred photos, it never gets old and I want to remember it somehow.  The wind is legendary and never gives up in stages or has tremendous wind gusts.  Its cold, real cold in the southern sections of Patagonia now in mid-March.  It’s in low 30’s in the morning, the ice logo shows up on my bikes LCD display — and when on a motorcycle — that’s just too cold combined with the wind of open riding — again, no choice.  Throw in wind, cold air, gravel and you have a concoction which is seriously hard work and takes all of your attention and energy to overcome — nobody complains — our group is great that way. 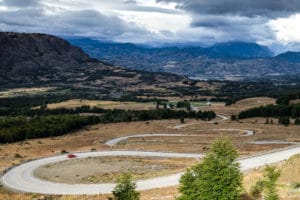 Tomorrow we ride the 435 km to Ushuaia — Most Southern City (town) in the World.  Ugly gravel will take over much of the ride — stressful yes, but when we get there, I will be really happy to get from the top of South America to the very bottom. 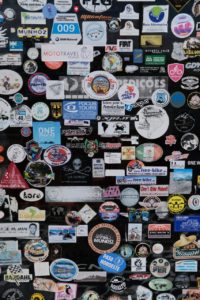