Feature image of me in the Peru Customs Office typing on computer my motorcycle information.  The Peru official is next to me.  He typed with one finger so I took over and I had a good laugh while he was trying to tell me what to do.  Cant imagine doing this in the USA.

Oh gosh, I struggled with todays byline.  Was it the current or was it, The Peruvian Diet? Could have also been, Father Bites it on Ecuadorian Motorcycle Ride.  All are adequate. 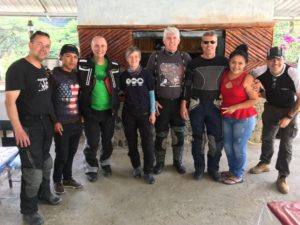 Today was one of those seriously crazy days.  Entering Peru, we cranked up the impoverish meter a full 3 notches and we blew open the crazy-shit meter by at least 75% — lets say 7 notches.  Ecuador seems like such a normal place compared with the Northern Peru border area and that is not an easy thing to say.

This morning started off at in Loja, a nothing town in Ecuador.  I gave our hotel a 1.5-star rating.  Will gave it the same except he came about that his own way — he gave it a 1-star plus a bonus of .5 star for a crap 1970’s blow dryer.  Anyway, it was a bed. 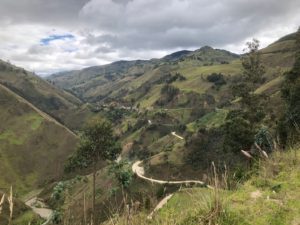 Leaving the town, it was about 65 degrees and we quickly got into the mountains where the temperature either rose a bit or dropped depending on the altitude again.  We got as low as 47 degrees and the scenery again was just fantastic.  I’m being repetitive, but I should because the ride carved into the mountains were dramatic and fun.  [Click on the picture of the clouds to enlarge — its real amazing to see how high we are and where the clouds settle below.  This has been normal on our rides through the Andes]. 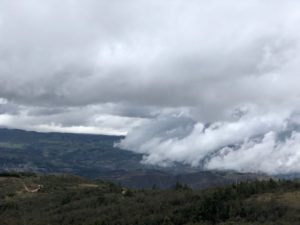 That is until I was in the zone and following Oliver on his motorcycle.  The sides of the road were often littered with large rocks and pebble that leaked onto the road from the escarpment.  Sometimes around a corner you open it up just to see a road blown out or part of a road lost or large amounts of rubble littering half the road.  I was going at a good clip and Manfred was ahead of me.  All of a sudden I see a 6 or 8 inch rock right in front of me going into a turn,  I only caught a second of the sight and my motorcycle went right over the rock.  It lifted my front wheel off the ground and I fought for balance while my wheel shuttered while traveling at around 80 km/hr.  I freaked but stayed calm.  My front tire went boom with an aggressive jolt and my steering wheel went out of control.  I have no clue how I save it, but I did.  Again, I knew 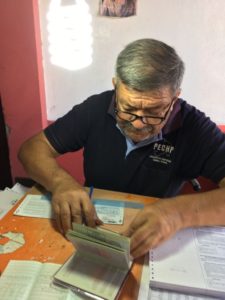 what happened and I gave thanks for not being my last ride and I moved on.  It took me a good 30 minutes to get over what just happened.

3 hour into the ride, we hit the Ecuadorian – Peru border.  Long short of it, we cleared customs and immigration 3 hours later for both sides from this tiny outpost with only a few useless workers.  I had a few hard laughs and the process is so archaic and just plain stupid.  The one guy who does the paperwork at the border still uses a paper journal an a large book to log each vehicle crossing.

So now we are in Peru.  Of course you know that I am a libertarian at heart.  I hate government when possible.  But I must say that now crossing two borders, something has 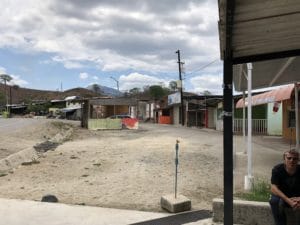 hit me like never before.  Each time we pass into a new country, the change has been dramatic — like really dramatic.  Crossing into Ecuador from Columbia felt like the Ecuadorians had a better life than that of the Columbians who live like shit on the whole.  Ecuador is a shit life too, but seems nicer.  Now that we moved into Peru, the level of shit has hit a new high on the meter.  Peru is a fucking cess-pit.  Its dirty, poor, much more manic than any of the other countries mentioned.  I never saw this in the brochures of Peru the Beautiful.   check out the border town on the right — a dead town. 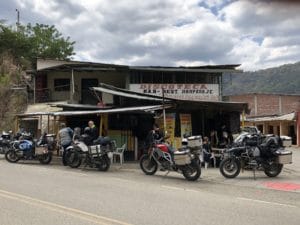 We stopped for lunch at a very local food establishment.  I think it must be the luckiest day of the year for the owners because surely nobody randomly goes to that restaurant anytime within a calendar year.  We added 9 meals and the owners can now take a holiday.  The village was busy with people but its a hell hole with nobody really working — not a chance anyone works in that town.  I ordered some fish thinking that the others were having soup and the water it was made in likely came from some contaminated pool of manure smell in the air.  The safe bet was fish.  Issue with that logic was that the fish I got was the skinniest animal in the water.  It had no meat — just bones.  I am so pissed I didn’t take pictures of that fish —  I ended up eating virtually nothing — hence the Peruvian Diet.  We moved on.

Our next leg saw what was to be the crazy side of life, Peruvians living in 4th world conditions if that’s possible — cant say 3rd 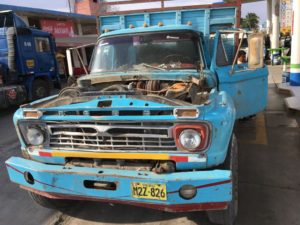 world because that would give it legitimacy.   This is ultra poverty and absolute maihem everywhere.  Trucks transporting mangos with 10 people on top of the truck — multiply that by 100 trucks.  Its mango season in this part of the country and on almost every available piece of land are massive piles of mangoes – everywhere.  Roads are riddled with potholes throughout our journey — and I mean deep potholes.  Nobody has fixed or serviced these roads in 20 years.  Cars are never in their own lane — in fact, lanes mean nothing and its like trusting your life to those Peruvian crazy drivers of busses, cars, motorcycles or transport trucks and these funky brightly colored large vehicles that move workers from 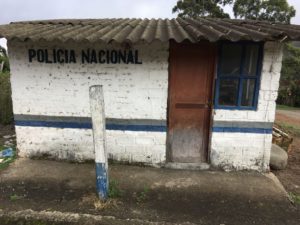 Along the way, trash is piled up on the side of the road virtually for at least 100 miles.  Not sure exactly about the system but it seems like if you have trash, why pay to have it removed — why not just toss it at the side of the road?  We were now almost at sea level and near the coast of the Pacific.  The temperature was getting hotter as time moved — by 4pm it was about 97 degrees outside and I was sweating in my huge bike jacket and GoreTex pants.  It then dropped to 94 and by the time we got to the 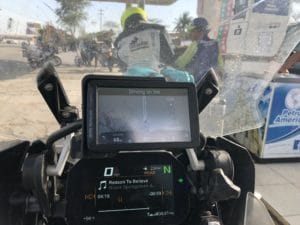 Anyway, when we got to Piura, it was 6:30pm and getting dusk.  We had to now navigate what we all described at Bombay in Peru — meaning the traffic was erratic and dysfunctional — bumper to bumper cars (and I do mean bumper to bumper) weaving in and out of lanes with no regard to the concept of lanes.  It was

dusty and that was blowing everywhere.  Side streets were only sandy piles of danger.   This clip does not give it justice — at moments, the traffic was almost touching bumper to bumper but more so, no lane management and just a free for all.  Turns are allowed from inside lane, outside lane, any side from anywhere.  Just maneuvering from street to street was dangerous and at any time someone could clip you on the side.  Making turns means that one of the assholes would have to let us in to turn — and that is not easy.  Just think, no space between cars in all directions and nobody keeps to the rules of lanes.  In the end, we all got through this intense traffic and we all gave each other a high five once we got to the hotel.  We all had a “Boot Beer” — a cold beer while we still had our boots on.  We were all trashed.