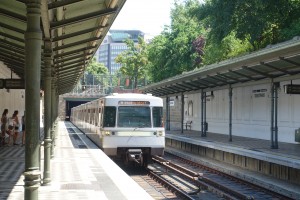 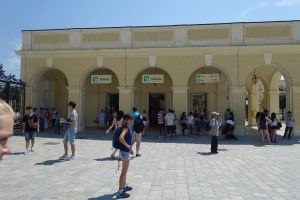 I know, I know, I said that I would not spend any time at one of those boring big-ass old European buildings which house some kind of extinguished  Monarchy.  Well, ok, when in Rome…  Sorry, I broke down.  I’ll make it quick.

This picture on the left look familiar?  Well, its the Summer Palace for the Hatzburgs for 600 years.  Moving on…  Who the fuck cares?  Big palace on huge well manicured grounds.  Could be a similar palace in Spain, Italy, France…  There, I did it.  Been there — done that.  50 minutes of learning that our buddy Mozart was there plenty of times starting when he was 3 years old.  I won’t bore you (or me) any longer.

We did take the subway there which is always fun.  Could take a taxi, sure, but much better to be one with my people on the subway.  And that was fun.  Some bum who seems to live in the Vienna subway system jumped into our car at one of the stops.  He had disgusting dirty feet, long dreddy and unwashed hair as well as real grubby tattered clothes.  Our subway dweller also carried his home contents in a potato bag.  He dropped the bag at the doorway after making his entry known to all, walked up to a random person sitting across from me and asked for food.  Amazingly enough, he got a banana from that nice subway passenger.  Thank the lord.  I would be real bugged if he came over to pay Paula and me a visit.  So After taking the banana, the fine bum got off — then left our car and then ran into the stopped train across the platform and was eager to work his art on another lucky traveler.  Proof I took the subway?  Here goes for all of you doubters. 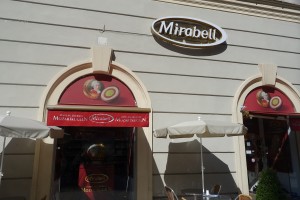 On other news, I have decided that AUSTRIA IS DISQUALIFIED from my upcoming Phil’s Best Chocolate Taste-Off.  I had hoped to include Austria since they seem to have three major chocolate brands, Manner, Mirabell and Heindl.  After 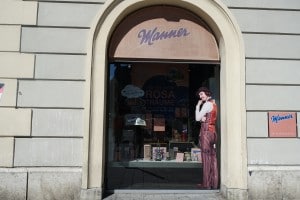 visiting extensively in each of the brand shops, I learned that for some strange reason, the Austrians only produce fancy chocolate — none of their chocolate come in the form of Dark bricks or bars.  Crazy or what?  Doesn’t even make sense!  Could be one reason the Euro is dropping — stupid people.  Seems they only have filled, wafer, puffed, blended, whipped and whatever — We all know the rules for the Taste-Off only include the best!  Dark Chocolate slabs!  Not milk chocolate.  Not even white chocolate.  Only 70% Dark.  Cant wait for Switzerland to shop and taste.  That should fill some time.

An example of Austrian chocolate is the famous Wafer from Manner.  Tasty but after eating 20 of them in a row — I felt a bit round.  I guess its the law of demising returns.

For any Foodie reading, I’m sure that I’m a huge disappointment.  I don’t know, but choosing a favorite meal of all time is real difficult.  Fresh fish after Captain Rob dove for an unsuspecting Grouper —  Thats good.  Lobster right from the secret under-water lobster-condo in Bahamas.  Thats amazing.  A great New York cut from Morton’s.  It’s so hard and all good.  But I’m a simple guy.  I generally am not big on blowing doe for a fancy dinner — Waste of money for me… And thats why the favorites of Austria is right up my alley.  Schmeckels, Schnitzels, Goulash, Pretzels.  The best!

So lets round this post off by talking about the best Schnitzel and Bier in Vienna according our pleasant concierge here at my hotel, Hanz.  Go visit the Plachuttas Gasthaus zur Oper, he said in his thick german accent — with the conviction of a deutschlander who knows his stuff. 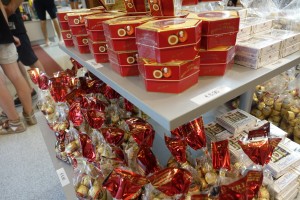 I took his suggestion and had filled my belly wish some real good shit.  Cold boiled but somehow greasy potatoes with balsamic vinegar rounded off the great meal of lightly breaded delectable schnitzel.  Drink?  Normally, it’s my version of a man’s-man Brown Pop — Diet Coke.  But I know that to make the best of a great situation is to add the national drink of Austria, Bier.

So sure, I’m a man, I can do that.  I can drink beer with my meal instead of Diet Coke.  I then did what any North American male non-beer drinker would do — I asked if they had light beer?  The waiter looked at me like I had 6 eyes — “Nein!” the waiter said almost laughing at me pretending that he has never heard of such a thing.  I know from going to German Biergartens in the past that it was a stupid question to ask a person who speaks German.  If your interested — save your 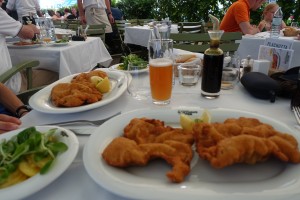 question — and the look of disgust from your friendly waiter.  No light beer!