Feature Image is of some donkeys carrying up gas cylinders of kerosene — super heavy stuff.  Just one of the different means to transport goods up into the mountain world of the Himalayas.  The others?  Mostly Yak and Human beast of burden. 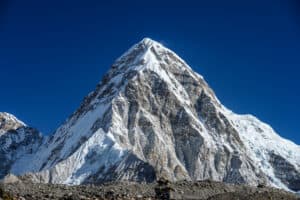 Today we are ending our day in Pangbuche, a town of 106 families at about 13,800 feet high and surrounded by the biggest mountains in the world along a panorama of prayer flags, stone houses with stone or sheet metal roofs and local shops.  Don’t let me over state, this place is tiny and simple.  I suspect this will be the theme moving forward.  The town is really built upon tourism because it is along the route to Base Camp.  Not much more to say other than the tea house were staying at is our last opportunity for what we will call luxury, however, we don’t have running water in our room, no water for a shower other than a bucket if we wish, but that takes bravery to take a bucket on pour in on yourself when the room temperature is in the 10’s of degrees F, no heat in our room, no flushing toilet — can’t wait until tomorrow to see what a non-luxury tea house looks like.  They do have electricity coming from a distant power dam, 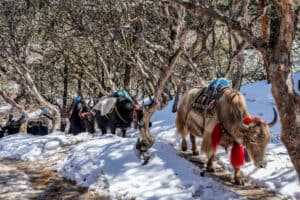 however it’s limited and while we were here, the usual drop in power occurs — and the power only provides 15kw for the entire tea house.  My home has a 30kw generator just for emergencies, never mind servicing a 12 room tea house, but then again, power usage is limited.  Fuel is supplied by either wood or Yak dung made into wafers which are stacked throughout the town.  In this part of the world, nothing goes to waste.

From here on in, for the next week, neither Paula nor I will be showering so beware, anyone in our path, this is a warning.  We will be using wet-ones for our underarm and face cleansing, but otherwise, it’s the smell of garbage ass coming.  I will use toilet wet wipes to run the crease of my ass so at least I feel I’ve done my part to stop any disease down there for the week without a shower. 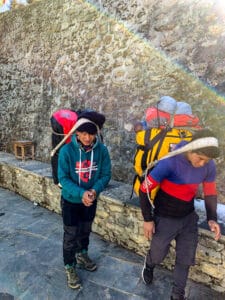 I think its now a good opportunity to discuss life along the Sherpa mountain trails, which is really not a trail, it’s the lifeline, the road, the artery for all merchants transporting goods, food, building materials, medicine and everything life sustaining which do not exist in the spare mountains.  There are no roads whatsoever since Kathmandu all the way into the interior of the Himalayas — hard to imagine, but true, roads do not exist anywhere.  No motor vehicles since Kathmandu either — bigger picture, no motors other than generators for some luxury tea houses.  Throughout these posts you have seem images of the paths which are no more than 5 feet wide of rocks, sand, dirt, pebbles, boulders and wood which make up this incredibly simple place.  The only thing close to some kind of real engineering is with the suspension bridges which are standardized in construction made of steel floor slats and steel twisted rope.  I have to admit, I’ve been to Peru, Bolivia — let’s say South America recently and into the low and high Andes, but they have roads — some very basic, and some real amazing and some downright horrible and dangerous, but they are roads.  These people have no roads whatsoever, it’s that poor.  Habitation means houses of blocks of 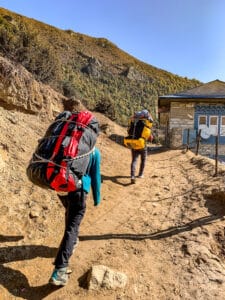 stone which are hand carved — each and every one meticulously made and its jaw dropping to think that a human actually carves each stone into a perfect block with a hammer and chisel.  Below the tree line, I saw people using a 10 foot long hand saw cut wood into 2×4’s — thats backbreaking work.  Paula and I watched men actually carve a stone into a standardized stone block probably 8”x8”x12”.  There was an organized group in one community up on a hillside which made window frames, but again, by hand, each frame at a time.  Never a power tool, never — I’ve yet to see one.  Can you imagine, never, ever is there a power tool anywhere — any construction is done by hand with ancient tools.  I’m shaking my head thinking about it. 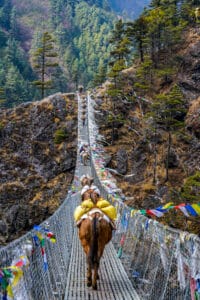 The Sherpa’s are simple people and they are really a form of a beast of burden for themselves or others.  Paula calls the Sherpa’s who carry goods; Nepals version of Amazon.  They are small people which I would say on average are about four and a half feet tall but are built to carry at these higher altitudes.  From young kids to real old men and ladies, they all carry something.  I’m told by the lodge keeper at this tea house that if needs wood or goods for his business, he must hire a Sherpa to carry up to 80kg (160 lbs.) of goods for 4 or 5 days from Lukla airport — thats right, 80kg (160 pounds) for a dude who is likely about 4.5 feet tall is skinny as a rake going up thousands of feet into the mountains on the hardest landscape and fast — much faster than us.  It so hard to imagine, but we see thousands of these little Sherpa people over the past week on the trails carrying just everything, from 20 pieces of full on 6×8 wood planks 10 feet long to containers full of gas to dozens of boxes of shoes, toilet paper and vegetables — everything the tea houses and distribution to towns which need and can afford these goods to survive on a daily basis.  Very little is grown in the mountains 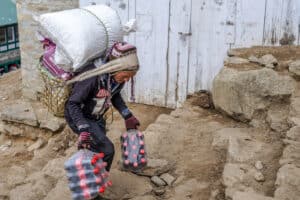 The way it works is that they creatively bundle the goods in baskets or use a wood board as the brace, or goods can be just tied together with string, sometimes 5 feet high and 8 feet wide.  They then put a wide flat rope about 3 inches wide on top of the bundle.  That rope serves as they head-piece which takes much of the leverage and load.  That is pretty much a constant on the transport system.  I wear super stiff boots with Vibram soles and really a tech wonder of a comfortable boot to walk in for long periods, while the Sherpa’s wear the running shoes mostly without any ankle support and flimsy — Think Converse shoes, but less support.  I watched them traverse in these shoes and I cant look — its just an accident waiting to happen, but it doesn’t.  I have not seen any casualties.  I will say that the men and ladies grunt and gasp for breath if 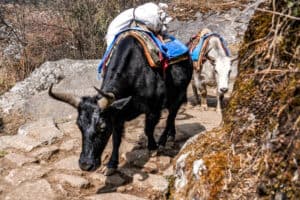 its a super heavy load and they are going up a long steep hill, but they stop, sit down, wait 30 seconds and then get on their ways.

Of course the other form of transport is either the donkey at lower levels below the tree line, say below 10,000 feet and Yaks below and above those levels.  Here again, watching these animals travel in a train of between 5 and 20 are always sure footed and rarely stop or misstep through torturous rocks, and narrow hairpin turns on multiple elevations.  The Sherpa who presumably owns and tasks the animals is behind the train and is constantly yelling at them.  The payload of these beasts are sometimes less than the men who carry goods on their backs, as incredible as that may be but again, sometimes these animals carry a ton.  The Yaks and donkeys are everywhere and the one interesting thing is that nobody and I mean no person rides on any animals — or I stand corrected, early on I did see a guy barrel through the trail on a horse, but that was the only time and I have only seen a horse maybe twice or three times.  Every mountain person uses their feet to navigate — presumably because nobody can afford an animal for leisure and just for the benefit of travel.  All animals, be it a yak or a donkey have a chain of bells attached to their necks to 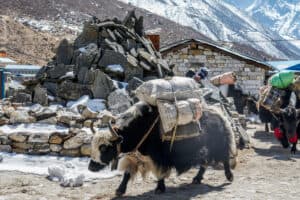 warn others that they are coming.  When they come, they come — and if you’re in the way, look out, the locomotive is coming — the yak’s have long horns like a bull and they can be dangerous.  We were taught on day 1 to always go to the side away from the hillside and never touch the animals.  Trust me, when they come barreling though, the last thing I want to do is forget those instructions and as often as the train comes, early on in our trek, it was like every 20 minutes or less was another group of 20 animals passing us.  As we go higher, it’s less frequent, but they are still everywhere, that said at these levels, the Sherpa men do the heavy loads.

Tomorrow we are off to Pharaucha which is only about 1,000 feet in elevation higher.  We will stay there for two days to acclimatize for our next challenge.  Our host at this tea house told me that everyone stops in Pharaucha for the extra day and we will need it.  He said that when he get into the 17,000 foot range, he finds it hard to breath and this dude is a full-on Sherpa, born and raised.  Anyway, let’s go with the flow.