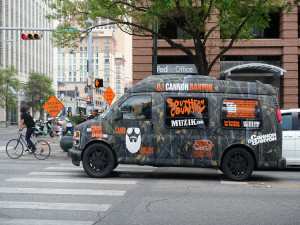 It has always been a desire of mine to visit Austin, Texas.  I guess to me, it seems like one of those towns that has its own rules and does not follow the conventional, fit-in-the-box city which I see all the time in my travels.  Austin has broken out to dare and be different.   So, I have driven on I-10 many times through Houston, I have driven across the top, through Dallas, but never bothered to take the detour in the middle to Austin.  That all changed on this trip.  I can go anywhere and I have tons of time.

Remember, I chose my bike trip to go to those places  where I never bothered before.  That’s one the reasons for this trip, although, not the only.  The other is that I have tons of time and want to use it freely without encumbrance of every day routine life.

am so passionate, ICE CREAM.  Yummmm, my FAV.  Blue Bell Creameries makes one of the nations best foods.  Brenham, Texas is lucky enough to be the home town for Blue 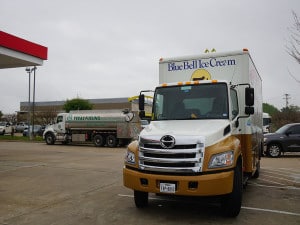 Bell.  I had read that they stopped factory tours but still had the country store — I followed my passion and my stomach and let’s finish this off by saying…  It was worth it!   For $1, you get a huge double scoop of a variety of flavors, freshly made.  The ladies behind the counter were so interested in my journey, they gave me the tasty delight for free.  I had to push my luck and after finishing that massive glob of delight — I went for seconds.  I had to, it’s a calling.  This time, I insisted on paying the buck.  While eating, I did notice that the ladies behind the counter sneak quite a few scoops themselves, and that was just 10am.  In all fairness, the ladies were large — Note to Management; bad move, should profile when hiring for this scooping position.

The one neat thing about riding a bike across the country is that tons of people stop you – and want to learn about your journey.  A 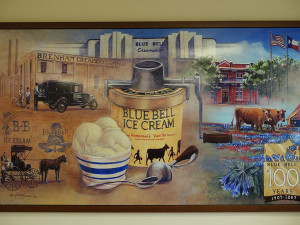 20 something on holiday from the Philippines came up to me while I was gorging in the ice cream.  Wanted to discuss my trip.  Then some people from Korea came up and my ice cream was melting so I had to focus on my priority.

From Blue Bell, I was off to Austin.  The ride was another 90 minutes.  Ass killing, but the happiness from my last stop still in my mind.  The weather was still fine and what started off as a cool morning turned into a mid-80’s day with sun coming in and out. 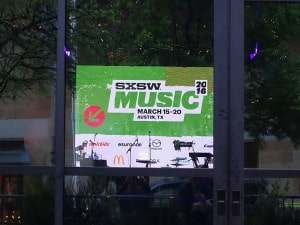 I got to Austin around 1pm.  Parked in my downtown hotel.   Unfortunately, the lot was underground.  Any biker of a heavy machine knows what I am thinking — I hate that.  The stability of a 600 plus bike going down a steep hill around a bend is a pain — cringe worth — accident prone.  Happily enough, I got through the short drive without incident.  Nice.

After checking in, I wandered the town and it was packed.  I landed in the middle of 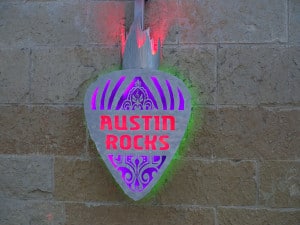 SXSW (South by South West).  The epic music and film event.  Austin certainly seems like the right place to house such an important music scene.  The downtown is wide open for young and middle age lovers of music.  I will add that Austin is one of the few towns in America that still embrace real music — Rock and Country– .  None of this shit electric music.  None of the single guy or chick bubble gum Karaoke music.   No Rap shit.  No Hiphop garbage.  No other music from some moron who probably never finished 8th grade, reading words poorly and calling it music.  Austin has lots of ROCK music and loves that along with a long history of Country music too.   I don’t know much about country music, but what I do know, I like.  Seems like Country has the same credentials as Rock; well thought out lyrics and talented musicians — not karaoke singers — did I already say that?  Maybe that’s why Austin seems different and the right culture to me. 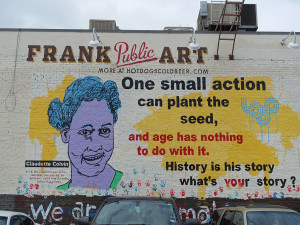 Austin was both bigger and smaller than I expected.  I’m told that the city metropolitan is about 1.5 million people.  Thats much bigger than I had thought.  But when you go in the downtown, its big, but not huge.  Throw in lots of people scattered, mostly young – it seems smaller.   The atmosphere is much like San Francisco, Boulder, Los Angeles and possibly Seattle wrapped together but one big difference; a mixture of a rural vibe along with a small city with enough to give some stimulation.  Young, hip, fun, cool and screaming to be a different place.  Nice.

But we always have to remember were in Texas.  I took a quick cab ride to look at a pair of Kevlar jeans to make my ride more comfy and inconspicuous when touring in some locations — and of course, I had a great chat with my cabbie.  My new best friend told me that the University of Texas at Austin had just passed a law to allow for exposed, unconcealed guns on campus.   Fucked or what?  He was outraged but then again, I was a bit more interested in my cabbie than the messed up Texas gun rules.  Not exactly a Trump fan, my Muslim driver had his feelings and he was not shy to share them with me.   He told me that he is not devout, but would not vote for a woman, meaning Hilary.  If he is not devout, then what would a devout think?   Apparently, Muslim men are not allowed to vote for any female in a power position.  A little fucked I think — Maybe that makes we want to hold on to my love of Trump that much more.  Poor Hilary wont get the Muslim vote either.

Oh, one funny discussion point on our cab ride kind of shocked me — if the woman thing was a 8/10 on the crazy scale, then his next thought was possibly a 9/10 — or better yet a perfect 10!.  My Muslim friend is not sure why the government does not HANG criminals?  He thinks the cost of putting criminals in prison costs too much of his tax dollars.  Aha, sure.  I didn’t know what to say?  All I could muster was that possibly the criminal was wrongly accused and hanging is kind of final.  My new friend did not care — hanging is always a cure for the bad people.  Ok….  Thanks for the ride, bro.

So, one day was enough for me.  I guess to see the real Austin, you need to check out the campus and rural areas where the living free culture is strong.It was fun. Not worth a second visit really, but if my kids decided to live there, I would understand.