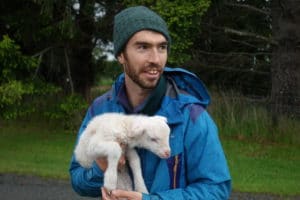 Crossing the South Island east-west, west-east, their are 3 main roads known as Passes which carve the mountains to complete the journey.  We left the west coast and traveled east through one of those passes, Arthur’s Pass.

We had stopped to go for a 3 hour hike up and through forest, open areas and streams.  I cant say that it was like other trails we had been because you will learn when hiking New Zealand that every area is different.  We were surrounded by huge mountains in this area although we were really just hiking some foothills — similar to what you may see in Colorado.  The weather was really chilly and rainy.  We really had gone as far as we could go when we turned around.  Paula, guess what?  Was upset we did not go for longer, dah.  I was happy either way but Graham said that continuing would only get colder and wetter and most of all, it was super windy where it was pushing our bodies in open and uncovered fields.  I would say that we were wearing clothing good for mid-40’s and it was getting into the 30’s.  Regardless, it was cold, rainy and windy a nasty combo.  Still, the hike was real fun and rewarding.

It was at mid-way between the area we started at PunaKaiki and Mt Cook where we hunkered down for the night at the Arthur’s Pass Wilderness Lodge.

The lodge is a working farm with 3,000 head of sheep and some cows on 4,000 acres.  On the farm property is a 10 room lodge for those looking to learn about the farm and includes lots of natural hiking trails surrounding the very dense forest area.  Simply beautiful.  Not exactly sure how much money it makes, but the lodge only had about 6 other guests — which in our travels is about normal for these out of the way lodges — but still, the amount of staff is larger than the actual guests.  I should look at the bill after I check out — might be expensive? 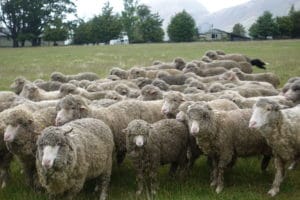 Check out the cover image of the herd of sheep and the dog in the background working.  Probably it was the highlight of this stop for me.  The dog actually does the herding and the sheep are so freaked out by the unending energy of the dog circling the group — they go where the dog leads them.  The owner whistles commands and the dog stops, looks and listens to each command.  You have to see this to believe it.  Check out the picture on the left here — in the back you can see the hind of the dog running — always like that.

My highlight was visiting the farmer/owner and getting a tour of the actual working farm which specializes in Marino sheep and their precious wool.  His family has owned the farm since 1995 although the history of the farm dates back to the turn of the last century.  It was the newest farmers brainchild to turn the farm into a lodge as well to augment the income.

Marino is the best of the best in terms of quality for wool.  It feels like the softest cotton but the properties are renowned for its strength, retaining heat in the cold and repelling heat in the warm, lack of smell after a few days of sweating [very key], ability to repel sweat and the softness is unequalled.  Used by some very high end active wear manufacturers around the world but notably by Smartwool in the U.S. and IceBreaker in NZ.  Its expensive shit, but all my hiking shirts and socks are made of this fiber — learning about the production and economics made this tour so much more interesting for me personally.

The picture on the top left is of a two day old lamb which was abandoned by its mother held by its farmer [click on the image to enlarge — its worth it — the lamb is so cute and almost like a dog].  When you have so many sheep over such a 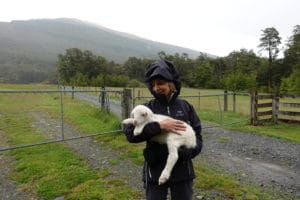 large area, some of the young sheep are bound to get abandoned and the owner rarely finds them.  In this case he did and will now hand rear the little lamb and keep it as a pet — along with the 20 or so other orphans he keeps.  He told us that the math for keeping the lamb is not exactly economical, but he likes to do so anyway.  Paula took advantage to hold the sweet lamb — And I don’t mean taste — at least right now.

Funny enough, the owner is so hardened and what I would call a stereotypical sheep farmer.  I love his look of the unibrow, massive gap in his teeth and he just does not care. His super easy demeanor and hardened look just trumps everything.  That said, his ability to communicate the business model of herding, maintaining and selling the wool was exceptional.

Paula and I did take a hike for about an hour before dinner on the lodge well defined paths and then settled down for our next journey the following day.