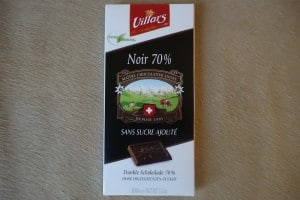 You can’t go to Switzerland for a week and not eat chocolate — or you know what?  Don’t come.  Just don’t come.  Your missing the point that Swiss make the best chocolates and have the biggest brands in the world.   In fact, the Swiss eat 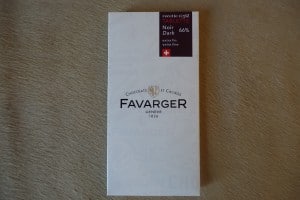 more chocolate per capita than any other country in the world.  I had to take advantage of this tid-bit of information and get off may ass and do something about it.

Well, I’m a bit sick after doing my favorite thing…  Eating dark chocolate.  Problem is, I just tested four of Switzerland’s favorite dark chocolates and one gourmet artisan bar.  I ate too much.  But folks, I did it for you!  You trust me to be your head judge for chocolate testing.  I appreciate that appointment so I will take it with the utmost ferver it deserves.  Now, the good news is that I do have a winner and you might be surprised.

So the test was performed as a blind – no peek – honest ranking.  We took a square of each bar and labeled it on an individual pic of paper.  Paula hid the name.  She gave each brand a number 1 through 5.  Then she gave me randomly a piece of chocolate along with a number.  I then wrote down the number on my own score card and gave it a rating.  Followed by each of the 5 brands, I had the entire tasting complete with notes.  We then did the test again in a different order presented to me.  Get it?  It was the real deal.  No half-ass bullshit testing here.  We at Phil’s Chocolate Institute do serious professional testing.

So with my [reluctant] helper, Paula, we tested the following brands; Cailler (Nestle) 70%, Villars 70%, Lindt 70%, Favarger 66% and rounding out with a chocolate that I picked up from my trip to the town of Gruyere and it is a custom 70% cacao.   There, some bonafide heavy hitters.  You 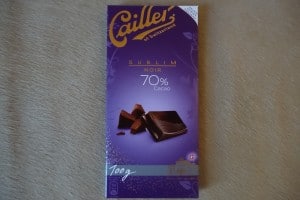 may not know about Villars, but its huge in Switzerland.

I will add that of course Toblerone is made in Bern, Switzerland, but the problem is that they don’t make a good old fashioned dark chocolate without all the nut and chewy crap.  I’m a purest after all.  That said, if you stick a huge bar of Toblerone in front of my face, I will slam that sucker down in a second.  But this is my test and I am focused on only pure dark chocolate bars.  Let me add that their are tons of other small Swiss brands, but I had to filter down to a manageable list — because I did not want to blow the travel budget. 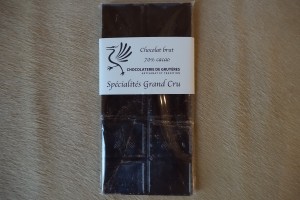 So without further wasted babble and valuable reading time, here goes the results.  Starting from least to most favorite:

Number 5 is a shocking one — The artisan Gruyeres bar.  Man, I thought that would be the winner.  I went to the shop and it looked very cool how they went about making the chocolate and putting it in molds.

Number 4 is a Swiss favorite Favarger.  Waxy and light flavored did not impress the judge — me.

Number 3 is a huge disappointment because I visited the factory, Cailler [Nestle].  Looked like they knew what they were doing, they only have a few thousand employees and a fucking huge factory, but eh!  Size does not always matter people.  It was lightly flavored.  Not rich at all.  Not much after taste.  Just ok.

Number 2 is not a huge surprise because the Swiss seem to favor this brand, Villars.  I had not heard of it before, but the bars are found everywhere here is Switzerland.  So, sure, it has every right to win.  Nice rich, non waxy and little after taste.  Yum!

Well, if you’re not sleeping by now, you have probably figured out that a shocking Winner was established.  Absolutely not the winner I would have guessed.  The volume based Lindt 70% bar won hands down.  Great rich taste.  Lots of cocoa flavor, non waxy and a good after taste.  The folks at Lindt deserve the kudos.

So what did we learn from this exercise?  First, don’t do this test unless you have an empty stomach or you will feel sick from eating so much chocolate — and I don’t care how much you love the stuff.    Second, if you come to Switzerland and have access to some of the best chocolate 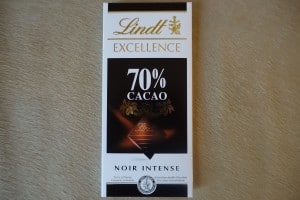 societies in the world, test and check out your favorite brands.   Last, don’t pre-judge just because Lindt makes volumes of chocolate and has tons of outlet stores — they know their shit.  They make great chocolate — even against the best of the best.