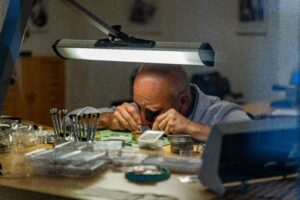 I won’t go into it now, but I have such fond memories of my last tour to South America with my 6 German buddies.  They all were so fantastic.  I honestly thought they were all top notch people and I would not give up that experience and friendships for anything.  To that end, back in June, one of the fellow journeymen, Bert, reached out to me to pop by his place in Germany if I were to intersect his homes coordinates near Nurburgring.  So nice… So nice.  But at that time, my itinerary was still in the making and I really did not know timing or really anything other that I need to be in Tallinn, Estonia by August 13th.

So as time went by, it became clearer that I’m in a bit of a rush and I really wanted to visit the Haribo temple, Porsche, BMW, Wunderlich to get a seat for my bike – and allow enough time for rainy day travel or any other inclement or situations which may arise.  I really had to skip the invitation which actually was along my route.  In hindsight, I should have called Bert to tell him to meet me along the highway for a coffee, but my daily grind is always in a rush — often in autopilot thinking about getting to the next location.  Cant go back — but if I could, I would.  I really, really like Bert.  Sweetest guy you’ll ever meet without a bad bone anywhere. 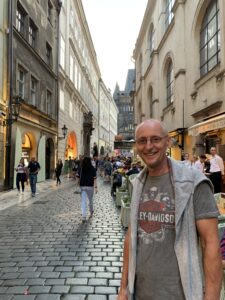 So on I went — passing through to Munich when I get another shout out — this time from Manfred.  His post pops up on my WhatsApp button.  Now, I never use WhatsApp so its strange to get a message there — however, I looked at it and read his message — he is somewhere in Germany or Austria, the name of the place meant nothing to me — and can we meet up if I am passing.  I wrote that I’m now on a tight schedule and I’m sorry.  He writes back that he will meet me anywhere and knowing that I’m heading to Prague from Munich, he would stay over that night at the same Marriott hotel in Prague, then ride with me to my next location to his home the next day and from there, I could haul off to Poland the following day.  How could I say no?  This dude is willing to ride to meet me for a day along roughly the same route I am taking anyway and pay a hotel night just to hang with me — I’m honestly honored to take that offer up — such a great guy.  One more thing, Manfred was always first to stop, pick up my bike like he was lifting a 10 dumbbell after I dropped it — which was often — and he never said a word — just did it with pleasure. 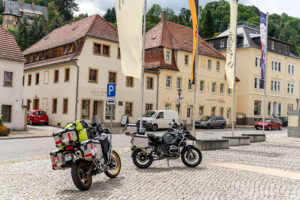 and your going back in time probably 100 years — its that dramatic.  The towns are older, very grey, the buildings are crumbling, the people become clearly less prosperous, the cars become soviet brands — its that stark a difference shockingly.

I will add that at this time, I also felt the bike was heavy with all the candy gummies I was carrying from Haribo in Bonn, Germany as well as the excess clothing and stuff I have been carrying for redundancy — the days of redundant clothing has to end — its just to much a load to carry.  It has not happened prior on my travels during this trip or even that prior, but I almost tipped my bike twice and if not for using all of any available energy and will, my bike would have been down — not at speed, but anyway, I needed to drop weight.  The roads were becoming more lively with cobblestones and other distractions.  I probably should have more about this trip through my new host country for the next few days but I really don’t right now.  Arriving in Prague, I was beat tired but I also had a exciting commitment to play with Manfred. 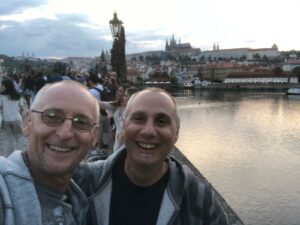 Manfred got to the hotel at around 7:00pm.  After I had committed to hang with him, he cut all meetings and commitments, spoke to his wife and then rode the 3 hours from his home to Prague on his perfectly clean BMW bike — a stark contrast to George these days who needs a bath.  We met in the lobby and agreed to catch up at 7:30 again to walk into town — which was just around the corner from the central hotel — find a restaurant for dinner.

Paula and I had been to Prague probably about 5 years ago and its one of those things — as time dates forward, I really forgot how big the city actually was — its big.  The town center is very large with tens of thousands of visitors buzzing around the miles of retail lined courtyards and streets.  I had forgotten how beautiful the city actually was and being totally honest, I had remembered a very different place.  Paula and I bought a crystal block from Mosers, a Czech manufacturer of very good glass — I still have it in my Crease. 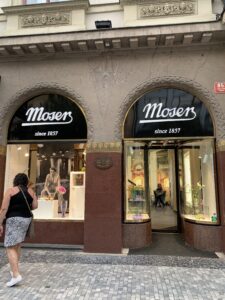 Anyway, once we walked around to the restaurant that Manfred had decided on though his personal concierge, Tripadvisor, we really walked a good half hour or more in circles.  The establishment was in some courtyard which we never found — too many complicated courtyards.  Oh well, we found a decent place to eat randomly — and random is really the right word since there are hundreds and hundreds of choices for food establishments to choose from.

We went back to the hotel, I went to the business office to investigate shipping my excess baggage and candy home, Manfred went up to relax for the night.  Shipping was going to be easy and professional — but costly.  I have tomorrow to deal with it at 7am.

Before breakfast at 8am, I went to complete the shipping of the 22 pounds of goods back to 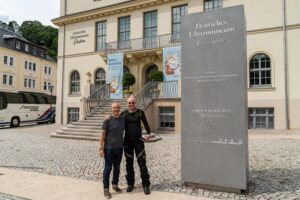 Florida — don’t tell anyone, but at least 18 of those pounds were candy – 18 pounds.  You know how heavy that is?  To make things even more stupid, I paid $40 for those candies at the Haribo outlet store.  Shipping will cost much more than what I paid for the candy, but I didn’t care — to my thinking, its not the cost of the candy, its the experience of buying, carrying and shipping — more important when I get home — its candy that has a memory.  I hope not to gobble it down like I do normally — who cares, its fun.

After breakfast, my objective changed — I was thinking that I just could not burn another day, or even one day — reality set in that I need to bolt.  Manfred took in the information like a champ and agreed so he said that he would take me on a scenic and interesting tour of Germany and at some point, he goes home and I head off to Poland — that way I dont skip a beat on time and I get a real local experience.  All good and were locked in now.

Our ride was like old times, he is so nice and comforting and like it would have been with Bert, I felt happy to be with a local host showing me the best back roads.  At one cross road, Manfred asked me if I were willing to burn 3 hours, get to Wroclaw, Poland later at night but see something real interesting — the historic home of German watchmaking, Glashutte.  It took me less than a second to agree, lets do it. 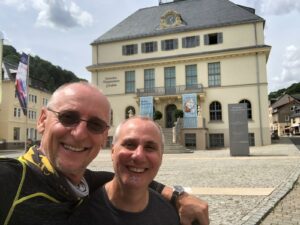 Traveling through the undulations of the German countryside with a fellow rider who is very experienced and rides at a good clip, it was fun to ride with someone again through lots of tight turns.  Its been so long since I shared a riding experience with anyone next to me — and I loved it.  We went through countless towns, farms and hillsides when we arrived at the Glashutte small village.  It seems that in the early 1800’s a group of watchmakers set up life in this very small community to share expertise and resources building the best watches in Germany.  Our goal was to try to visit a factory, but at least, they had a huge museum there.  In fact, Manfred had never been there before.  The museum was a huge delight — filled with the history of German watch engineering.  It was large, old and modern at the same time,  professionally designed with multimedia, great and fun displays and equally important — tons of watches and time pieces dating back.  Apparently, the watchmakers at some point created a Union of interests including about ten small businesses and they called it the German watch Union, Glashutte.  Like Audi and 3 other auto manufacturers formed a group (later becoming Audi), I guess its a German thing to do.

We had lunch outside, met a very nice couple who lived in the town and then Manfred bought a new watch.  He is a pilot and 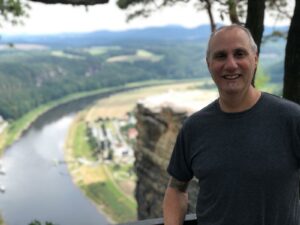 wanted a new watch — and apparently it costs 75% less to buy a watch in this town vs retail outside.  I dont know, but the costs range from $1,000 to $100,000 so its not trivial.  Anyway, like a Manfred thing to do, he was decisive and bought the right watch for him — although when it came to leaving the store, he was going to put on his IWC watch on again — I asked him how how he could buy a brand new watch and use the old?  He caved and wore the new watch, like dah.

We continued our ride for another couple hours and then it was time for hugs, handshakes and best wishes.  This guy is a dream friend.  He owns a plastics company which specializes in pipes for cities all over the world to run water and sewage — and he is successfully growing with multiple plants across Europe.  He flies his own plane everywhere — has his own hanger next to his home, is not a flashy guy but has enough comfort and independence to peel and ride with me —   That aside, he is just a super nice person that I’m happy to call my friend.