Feature image is of my lovely bike parked on the side on an aggressive gravel road on Route 7 (Carretera Austral) in Chile, Patagonia.

Well, today was different and while we are nearing the end of this adventure, I feel the stress of being in Patagonia. 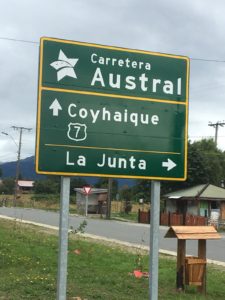 Our briefing last night said that the roads leading from Argentina to the Chilean border would be mostly gravel, followed by the border and then another 100 km of gravel roads — possibly leading into some paved roads — which would lead us to our next stay — somewhere in Chile.  I mostly ignored the discussion — been there and done that.

So yes, leaving the small town of Esquel, Argentina which had a small bit of civilization — not much though — and within 20 minutes we were indeed into a loose gravel — worst type and that lasted the entire 90 minutes to the border.  I must add that it felt like hours.  I stood up on my pegs to avoid being beaten up by the bumps and movement — then got tired and sat down but the feeling of sideways movement on my back wheel is more pronounced and I feel every washboard in the road so I stand up again.

The crossing was really fast and I think we were a bit lucky too.  First, the border only had one entrance to this small outpost on this gravel road so I don’t recall any trucks there and also, who the fuck is riding in Patagonia on this hidden gravel road to 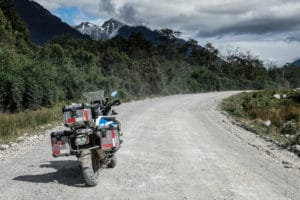 cross countries?  If we contrast the first crossing which took hours, this took just a few pretty quick minutes.  All good and we were in good spirits.

I actually finished first in our group — and Kanit was second.  No that’s not true — I thought I was first, but Martin and Katrin finished and they peeled into the first local town for a coffee and we were to meet them there.  I was happy to wait for the group to be done with their paperwork inside the immigration and customs offices when Kanit said that we should go meet Martin in town so I agreed.  One of those, who cares moments — so off we went on some nicely paved roads in Chile.  I was so happy to get back on some asphalt after being beaten up and unsettled in those Argentine lose stones. 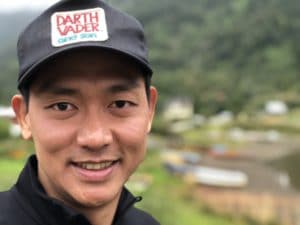 We got to the town and saw nobody so Kanit booted past — I followed him thinking that he knew something more which maybe Martin had told him, or he was going to skip the break and bolt right to the next hotel — both options were fine with me.  On occasion, Kanit likes to leave fast and just skip everything to get to the hotel faster.  I’ve been with him a few times but on the whole, I don’t mind riding with the group — generally not for safety, but its more fun and if you kill the roads with speeds that would put you in the slammer in the states, its fun too but shortens the day and there is generally nothing to do at the shit hotel anyway so I like to enjoy the moment of riding and stopping along the way.  I was going to find out too that the town we passed was the only town I was going to pass for the next 5 hours.

I’ve said it before but its worth the memory — on this adventure, I have only seen two cops on roads for months.  For some 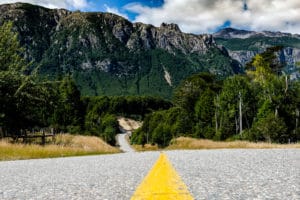 reason which I just can’t decipher myself, South Americans — even the half-civilized countries like Argentina and Chile — never got the concept of collecting money for speeding on roads — or even give tickets for road and driver violations — violations?  None that I am aware of in the entire continent.  I just don’t get it.  So it means that we always fly at speeds that are insane on occasion. Forget safely, I always feel safe, the ability to go any speed is such fun and unrepeatable anywhere else.  I think sometimes it has to do with the fact that motorcycles in these places can only go maximum 30mph with there 125cc engines — mine is 1200 cc.  Or the cars with their similar 1200 cc engines (1.2L) cant go that fast either — but they can go fast enough I suppose.  Not sure, but its a mystery and I plan to benefit from it. 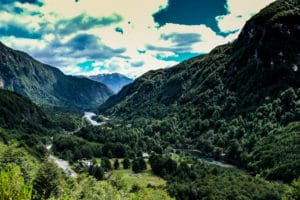 Anyway, he kept going on the nice road for the next 10 minutes that immediately turned back into gravel roads and maybe even rougher than in Argentina.  I am definitely slower than Kanit on gravel and I’m amazed at how he flies on the stuff — and do many of the others — I am more calculated and I’ll add fearful of falling.  Your bike is always moving sideways and if I could explain the feel while riding; picture riding a two-wheel machine on marbles — the wheels are gliding on marbles.  When you go straight, the large and well-trodden rubber of your wheels move uncontrollably but they stay up somehow with physics and the idea is that you let the bike do as it wishes — and it will stay up somehow —  but when you turn, the marbles want to take your tires out and down.  It is really slippery and at moments frightening for me.  I go slow around curves or I am not really into the alternative, however, a few times I’ve come too hot and came close to falling — far too many times.  Riding straight is ok, but still, my mind wanders about what could happen.  It has never happened on this trip, but it could — as it did when I was in Utah and fell constantly with sand, gravel, big rocks…  So far on this trip — no issues — but the ugly feeling is there.

On we went for a whole 5 minutes and then Kanit bolted!  No clue what he was doing?  He was gone and I was alone with my bike, the heavy gravel, and my GPS to get to the hotel.  I have to admit that I was shocked.  Where is the buddy system?  He usually does not bolt like that so I thought maybe at the next junction he would be there — but never was and I had maybe another 3 or 4 hours to go on this shit — alone.  I did think the others in the group would catch up so no big deal and I moved on.

The scenery as you can well imagine was magical.  Giant mountains straddling Chile Route 7 and I was grunting and even 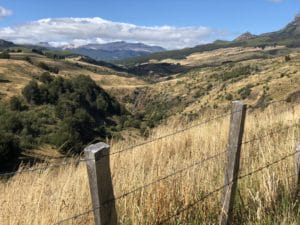 forgetting about the horrible roads which seemed to go on forever and no end in sight.  I then decided to turn this experience into my own photo event and took a ton of pictures of my bike, the roads and to some extent — but the scenery although funny enough, not tons.  As I said, the scenery is so in your face and amazing, It gets a bit boring.  But the idea of the very lo0se gravel on my bike was overtaking all my thoughts.  I wanted to document that.

I actually started to think that the alone part of this day was the best part.  Not being concerned about stopping, putting on the kickstand, taking off my gloves, pulling the camera out of the tank bag, finding and taking the picture and then reverse the movements, turn on the engine — then catching up with the group.  Its a lot of work to leave and take pictures with the group — so I don’t too often.  But alone, I stopped dozens of times and loved it.  I started for the first time in a while to get creative with my shots since I had the time and that was fun too.  So, I went for another few hours and still nobody passing me.  Sure the bike was moving tons and I rationalized that if something were to happen, the group would be only a few minutes behind so that was a huge comfort.  Regardless, I really was enjoying my ride by 2 pm. 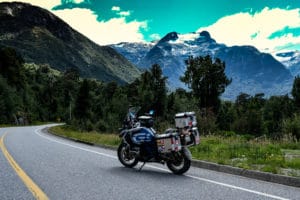 The road did have other vehicles which are there for the adventure as well.  Some small busses and hardened trucks with backpackers, white water rafting boats, etc.  Also shockingly, mountain bike riders.  Not sure how they do it — but they are out there on these roads.   Anway, the motorized vehicles in front of my bike kick up massive amounts of dusty, dusty and dirty dust.  So thick on occasion, you cant see in front of your bike for a large distance — it’s totally unsafe.  And it lasts for minutes after I have overtaken the vehicle.  When an oncoming vehicle comes, it’s the same but not as bad.  My bike and my body is full of that thick dust all day.  My bike looks like an adventure bike and has not been cleaned in weeks — its full-on mud and dirt.  My riding clothes — jacket and pants — have never been cleaned over these months so they must smell sweet and are ground with dirt.  Its all part of the journey I suppose.

Just as things got comforting, I ran into a construction zone with a series of detours.  On my ride, I had passed some construction trucks and even some spraying water on the sandy and rocky road — not sure why exactly but the outcome was mud — the one thing worse than stones on sand — yep, I hate slippery mud given mine and watching others bad experience on that medium.  But it was fine, I went past it without incident other than a dirty bike.  This detour looked dicy and I really was not into the jogs and concern of what my lye ahead — no choice.  Yes, the gravel got bigger and the artificially made turns more aggressive and over the bride and then…  I see a paved road!  No way!  Yes way, it was a freshly paved road.  I was skeptical but so happy.  It had been 4 or 5 hours on this shitty gravel and finally asphalt.  I booted. 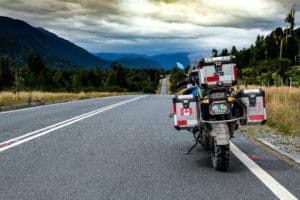 Not only was the road fresh, it was also shadowed by beautiful mountains and it was designed unlike most South American roads — with safety in mind.   The curves were long and wide so it was easy to goose the bike to 100 mph and no issues — it was fun.  I stopped a bunch of times for pictures and finally around 2:30 pm Manfred and Bernd came behind while I was taking pictures and they said let go for lunch.  We rode another 20 minutes, found a nice place for lunch in the middle of nowhere and it was great.

Leaving lunch on our last leg to Puyuhuapi, a town of 500 people where we were going to sleep, we hit gravel again — Fuck!!!  The last 30 km was going to be gravel again.  I was exhausted and got to the hostel we were sleeping.  Kanit greeted me with his friendly hello — he apologized for bolting — it made no sense, but I did not care.  I had another great experience anyway. 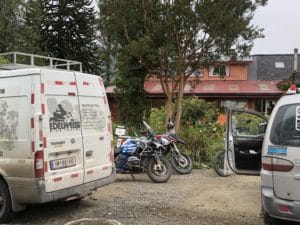 The town is all of 1000 yards long and wide, all gravel roads and the hostel is a hostel.  No food in the town except we ate crackers, cheese, canned tuna and some other stuff from a general store.  My room is a closet and my bathroom is outside my room in an open area shared by 4 others.  I was going to bed at 9:30 — nothing left to do today.

Were in Patagonia now for sure — and not the tourist area and its cold.