Feature image is of a winning BMW motorcycle from the historic Paris Dakar Rally — preserved at the Barber Vintage Motorsport Museum. 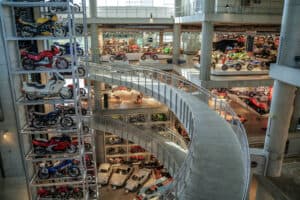 I had planned to go through Birmingham, Alabama for a reason.  Trust me, if I had not had a reason, Birmingham would be one of those — let’s avoid that place please — I’d rather not get shot today.  So what could the reason be?  Dah, to visit the Barber Vintage Motorsport Museum, a place I’ve seen on Instagram and Pinterest about a million times.  The second reason presented itself when I knew that I was heading to Birmingham — it just so happens that Blue Bell Ice Cream factory is just an hour outside the city — a stroke of luck.  So what could make for a better day other than the day I got married to Paula?  First visit the epic museum and then haul off to Blue Bell for some ice cream lunch and then go on the tour of the ice cream factory.  Life is good.

George Barber was a son of a wealthy businessman in Birmingham.  He was a young man in the 1960’s and George took to his 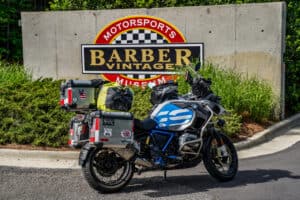 passion to race Porsche’s in Europe and he was good — winning over 60 races there.  Unfortunately, his father passed away and George had to take over the thriving family business.   George’s love of motorsports lead him to start collecting some race cars in the 1970’s, mostly Lotus.  At some point early on, he decided to collect motorcycles because they are in his opinion pieces of motor art with all of the working parts exposed.  By the mid 1990’s, George’s collection grew to 450 motorcycles and he had taken a old building to share his collection.

“Build it and they will come”:  At some point, George who is incredibly aggressive, decided to go big, and provide his loving 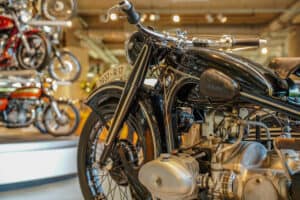 museum with an $80 million personal donation —  and buy a 900 acre lot just 20 minutes outside of Birmingham then construct a 228,000 square foot incredibly modern purpose-built building to hold his massively growing collection which opened in 2003.  If that was not enough, George built a test track for his motorcycles for fun.  That lead to him building the impossible — a full length and best-in-class Indy race track where they would host the Honda Indy Grand Prix of Alabama each year along with a Porsche Track Experience Center where you can learn to drive like a race car driver.  I am not sure how many cars in this incredible building, but there are hundreds of the best restored motorcycles you can ever imagine — it really is a gallery of motorcycle art.  Today, the motorcycle museum is the largest in the world with over 1,400 owned.

I had no idea about all that stuff when I decided to to go to Barber.  I’ve known about the museum for at least 5 years but its 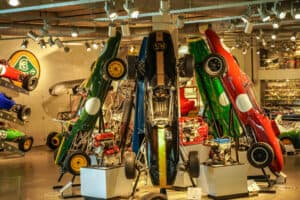 always been impossible to get there given its very remote location.  I almost did on my 2016 ride across America, but I didn’t for some reason — my loss.  I got to the museum at 10am for the opening today.  After paying the $16 and dropping off my motorcycle gear (jacket, tank bag and helmet) in the cubby, I went out to start — my jaw dropped within seconds.  I had no idea how big this place was and the quality of the machines.  I wont even try to explain — lets just say that their are hundreds of motorcycles displayed in the most imaginative way with the best materials, best setting and restorations beyond belief. 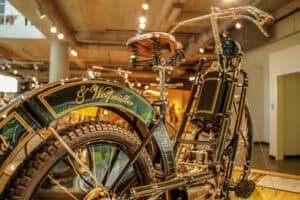 The bikes on display range in age from the first production motorcycle, the 1894 Hildebrand & Wolfmuller seen on left — through to 1943 Harley WWII Army Camo bikes, jet bikes all the way through to a 2019 BMW R1250GS and everything in the middle that I missed.  It’s hard to believe that any museum could possibly have that much money to spend on this type of motor art — and have full time staff restoring them.   I spent almost 2.5 hours walking, pinching myself and zooming in and out of these machines.  I took tons of pictures which probably will never be used, but the fun of taking the shots was comforting and relaxing.  Shooting these bikes from all different angles makes you realize how prized the possessions on display really are. 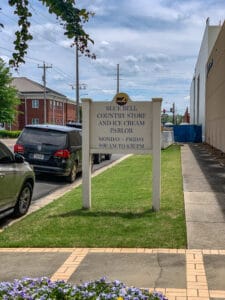 Like I was really on cloud nine and my expectations were to have a nice trip to see some cool museum for cars and bikes.

It was now 12 noon and I wanted to bolt over to the Blue Bell factory in Sylacuga, Alabama, about an hour away from the museum.  The ride was a bit daunting at first — the road was super winding and narrow threading through a forest with a huge decent.  A year ago, that would be a daily occurrence in South America, but I’m out of practice and I was a tiny bit nervous going through these switchbacks.  I actually enjoyed it but in the back of my mind I thought about falling and nobody would be around for a long time — anyway, it was fun and worked out well.

Finally I got to the massive factory in the tiny hilbilly town — thinking that my day could not get any better.  I parked my bike, took my gear and walked towards the factory Ice Cream Parlor sign and door.  Followed the way to the empty but nicely laid out parlor which 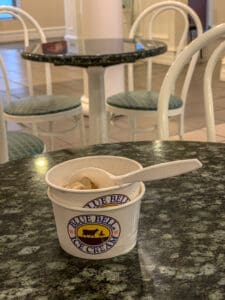 a single lady behind the display and a factory worker getting his scoop filled.   My turn…  A huge overflowing cup of Moca Almond Fudge — $1 thank you.  took a seat and chomped down the fresh and delicious cup of rich and gooey happiness.  Not to stop there, I decided to go for round 2 and got an overflowing cup of Pralines and Cream.

It was there when things fell apart.  I asked the nice lady where the tour was being held — although it seemed that I was the only participant — but who cares?  The worker told me that they no longer give tours — What?  But it said they give tours on the web site?  Sucks and she ruined my day.  I was so much looking forward to two of my favorite things; ice cream and factory tours.

Anyway, I could pout or get even –.  I went to the window overlooking the factory and you could not miss the big sign — No 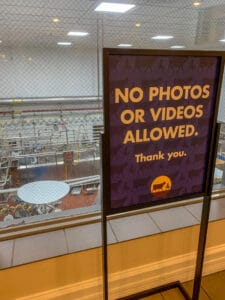 Photos.  Aha, I wanted pictures so fuck them — I’m going to be a bad boy and disregard the big brother — well, sneak some pictures.  I walked over to the window, took some pics and noticed that a couple of the workers in the factory were watching each shot I was taking.  You can see the guy watch me in this picture on the top right side.  Still, I took some images with my iPhone to keep it a bit quieter.  Then I saw a lady on the factory floor pull out a microphone and talk to someone.  For me?  Was she calling the Ice Cream Police to rat on me?  No, no way.  I kept watching the factory floor and was so happy to see the process of ice cream being made and packaged through the large windows. 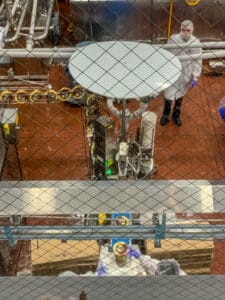 Just when I thought I was not going to be bugged again, the lady that was serving me walked up to me and asked if I was taking pictures — seriously?  I told her that I had taken a few and she continued to lecture me and tell me not to do so.  I agreed with the happy feeling that I got away with the big heist.  No tour — screw them :).

I left to carry on for my 4.5 hour ride to Jackson, Mississippi — home for the night but not before stopping at Walmart an hour outside of Jackson.  Assuming that there is nowhere to eat near my Residence Inn, I picked up some Diet Coke, a turkey sandwich for my room dinner — disgusting — and some beef jerky.  I must add that the people watching at the Jackson, Mississippi Walmart was somewhat interesting and fun.  I won’t go into details here but let’s say that it seems that the human breeding process can sometime get screwed up — I’ll just restate — its fun people watching there.

Tomorrow should be Dallas/Fort Worth.