A couple of days ago we went on the Abel Tasman National Park.  In a nut shell its a 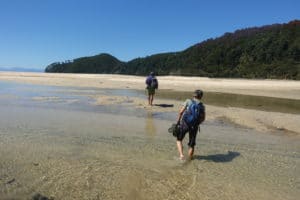 5 or 6 hour hike on a very large island which is owned by the New Zealand conservation authority.  I’m just catching up now on my blogs but it’s actually good I delayed so I can compare with the two extra days of hikes we completed.  As we know by now, each of the different regions and trails has very different scenery and atmosphere — in some cases dramatically different.  Today we hiked a bone-fide rain forest — perfectly opposite to the Abel hike and only 4 hours away.  Hard to believe.  It’s almost like hiking in Florida and then traveling 4 hours by car and hiking in the Amazon.

The Abel Tasman National Reserve is an island 40km long and I’m now sure how wide but its wide.  Best of all, the island is surrounded by beautiful aqua colored super clear and live waters of the Tasman Sea. 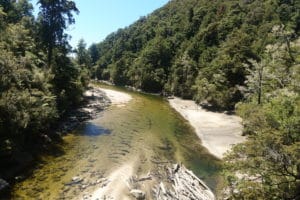 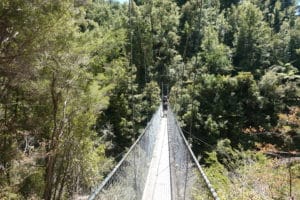 To get to the Abel Tasman Island, you take a 45 minute catamaran ride from the main land through dolphin pods, smaller rocky islands with seal colonies and finally it docks on the beach of the main island.  Our boat got us on the beach at 10am in the morning.  You then get off and travel the well defined trail systems.  We were lucky in that the weather was just a perfect 75 degrees outside — the warmest temperature we have had on our entire trip so far. 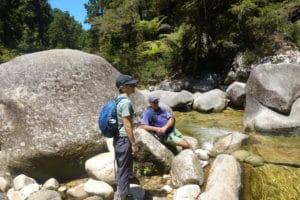 so often viewing the aqua green or blue sea in the backdrop below from the peaks of the hills.  Thats exactly why people come and visit this park — its pretty unique.

Graham is chatty, but a great kind of chatty.  Still eating up those stories of his travels around the most untraveled parts of the world of which countries I cant even pretend to be able to pronounce or else, all sound the same. 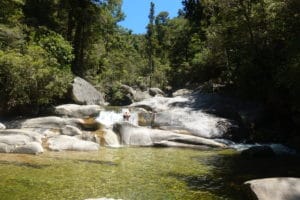 Again, we did see plenty of younger folks on the trails with very few people older than say, 40.  Its now obvious that most young people taking off 3 months, a year or more to visit NZ, and parade the world class trails.  Older folks are just not into this scene as much — not exactly clear why?  Most of the older folks we have seen are touring the North and South New Zealand islands for its landmarks, beaches, cities and towns.  Man, I don’t know what to say other than those folks don’t know 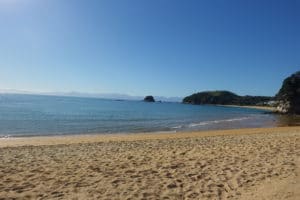 what they are missing.  NZ has just amazing parks and trekking.

Anyway, we were picked up at 4:00pm from the same beach we were dropped off.  We did the full circuit to get back to the start in about the 6 hour allotment.  All was great and weather stayed comfortable.  We took the boat back to the town which we started on the mainland side.

Then off to the resort which we had reserved — almost like a B&B but in an awesome Architectural Digest type house which hangs over a hillside onlooking the Tasman Sea and is a mix between Japanese culture and uber modern wood architecture and stupendous surrounding gardens.   Seriously comfortable and modern.  I did sleep like a baby each of the two nights there. 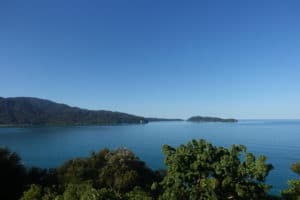 The Apple Split Retreat together with the creepy proprietor who wants to show us around his 7,000 sq. ft home for hours [I was good for 2 minutes] — watches us eat every morsel of our dishes and wants to talk, engage and ask questions — all while we are chewing and looking for our own space after a long hard day.  Not only that, he laughs at his own jokes like a little school girl constantly — so Irritating.  His wife is a tiny 3 and half foot Thai lady who at first blush, your confused how the two owners fit together since he is an American from San Francisco originally, then went to Hawaii, followed by his life in Thailand [hence the creep] and finally settling in New Zealand.  He is over 6 ft tall, but after a while, you see the wife is very nice and a great, great chef.   At first I was freaked out by her size, accent and demeanor — not of an owner but as a illegal hiding from the law, however, after the first day, my insight and prejudice settled in — she was gentle and sweet, very proud of her recipes and the normal one.  All her meals are very healthy, delicate and made with no sugar or fats.  She made a tofu based creme brûlée which was to die for.  She deserves tons of respect.  But who cares, this guy is seriously a stalker and creepy.  I might write a bit about our host in Abel Tasman Apple Retreat later.  Creepy and bad vibes in one of the most beautiful scenic sites on the North Island.

All in all it was another experience and rewarding hike.  The pace of our hikes are now settled in as a respectable fast pace — not too much time for relaxing or else some members of the team might not be happy.   Still, loads of fun and rewarding.