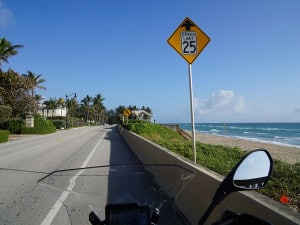 So it has become a reality — I left at 8am on Sunday morning, not exactly sure of what to expect.  Sure I had watched a ton of videos on YouTube.  I had bought what was needed to make it happen.  I roughly logged my trip out.  Ok, ready, lets go — enough of the planning bullshit.

I had two criteria for the first day’s ride; a) I wanted to take the long way to Orlando and enjoy the scenery and b) it was calling for rain at 3pm, so I wanted to get to Orlando before the rain.

Just by way of background, by car, the trip would take 2.3 – 3 hours via I95 or Turnpike.  I decided to start off by driving along the ocean north on A1A.  Atlantic to Pacific trip.  I drove up to Mar a Lago, My favorite boy, Trumps hotel in Palm Beach — about 30 minutes — and headed west towards Lake Okeechobee a hundred miles away.  The idea was to head out to Orlando from there.  Well, I fucked up. My GPS was set to go only in small towns and stay away from anything that smells like a highway.  I hit every single small town for the next 200 miles.  8 hours later, I got to the hotel.

I will say that it was real interesting to see the middle of Florida.  Normally I either go on the west coast – I75 or the east coast I- 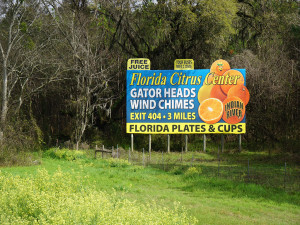 95.  Rarely in the middle.  Well, if your curious, their are a thousand farms, tons and tons of cattle — like who knew?  I passed a hundred miles of orange groves — including the factory that makes Florida’s Best Orange Juice.   I think they do offer factory tours there, but it was Sunday — next time.

So the good, the bad and the ugly.

The good:  I love riding the bike.  It just feels great to be on the road.

The bad:  I was trying to escape the rain so I was in more of a rush than I wanted.  My goal is not to get stressed about anything or chase anything.

Last, I am collecting Beef Jerkey brands along the way.  I will share the winner later.