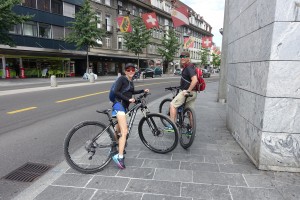 We had decided to take a long bike ride today instead of hiking.  Choosing a bike route from Interlaken to the Capital of Switzerland, Bern.  Government in this region has built a whole network of paths dodging through farmers fields, shores of glacier lake, shoulder of river with great rapids, through towns and even forests with gravel.  Real diverse bike trip.  Total route took just over 4 hours and 58 km.  We then toured Bern for a couple of hours — following that was a train ride back to Interlaken West (complete with bikes on train) which added another hour.

I’m going to jump to the punchline and give this outdoor event an 8.2/10.

So yah, I made up that number out of the air.  No scientific anything.  Let me warn you, I’m the only judge so it could be flawed — but come on, I’m the best judge, next to Howard Stern of course.

Here is how I got there folks …  Start with 10/10.  Ok, that makes sense, right?  Now, huge deductions for serious ass pain.  Like enough to think that I broke a blood vessel in my butt-crack — It killed the entire trip.  Thats a 1.5 point deduction. 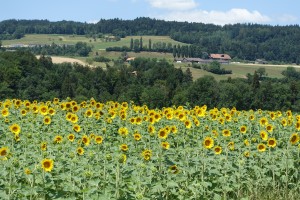 Big dedication I admit — but after all, it really hurt.  Note to Phil — next time wear bike shorts with huge padding.  Then there is a .3 point deduction for whatever.  No clue about that either — its a hunch.  So there, todays bike ride score is in.

Went through some awesome Swiss towns.  Saw real people.  Saw real Switzerland.  No tourists bullshit along this route.  I should add points for that — but I’m too lazy and already told you the score.

Switzerland is one of those rare places that I have visited that is super clean.  Its like the citizens actually like their country.  My theory — if you treat your country like shit and throw garbage everywhere — then you have bad citizens.  Switzerland highways have like no garbage.  Zippo.  Just incredible and special.  More possible points for overall Switzerland trip. 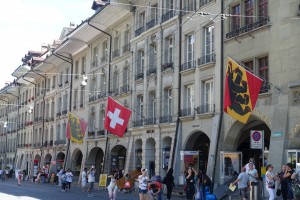 Anyway, thats about it.  Great ride.  Busy day.  Active and loads of great scenery.  Listen to me — if you get huge mountains, lakes, rivers and real elderly healthy nice people, then you have a great country folks.  Switzerland is that.

Last story:  On train returning from Bern to Interlaken, we had the great opportunity to meet an elderly mid-70 year old Swiss man.  Paula and I were crammed in the tiny area where we put the bikes on the train.  This old guy also comes in at Bern with his fully loaded bike — rear basket — beautifully warn, used as his daily rider and clearly loved bike.  We were all crammed in a small area.  Some dick put his luggage in the bike area, right where you lock down the bikes.  I looked at the passenger bags and rolled my eyes.  Paula looked at the bags wondering about our next move — like any lazy people would do — we both just caved and were going to stand in the cramped space for the entire train ride holding our fucking 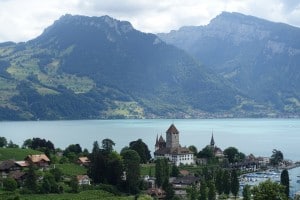 bikes instead of securing them and taking a seat in the comfy air conditioned seating area attached.

So the old man assesses the situation.  Takes control.  He then goes in the seating area and asks the crowd in a a pleasant but stern German growl, who owns the luggage in bike area.  Once found, the dick who left his luggage took it away.  Then my 70 year old bro neatly puts up Paula’s bike in the rack.  Then he offers to put my bike away.  Being a strong beast as I am, I declined respectfully.  I did it myself with a couple of attempts — after all, I’m about half as strong as the old man.  I felt proud of my sole accomplishment.  Then the 70 year old bro put his bike away.  Everyone happy.  Love that guy.  He is Switzerland.  A healthy 70-something year old Do-er.

After returning to hotel, we checked out and now on our 2 hour drive to Lausanne, on Lake Geneva, across from the French boarder.  In fact, the other side of Lake Geneva — about 8 miles wide — is France.  Just a stunning place — on the water and giant Alps Mountains right on shores of
lake.  More to follow…