Feature image is of my bike high up today at over 16,000 feet up in the Peruvian Andes — called the Pastoruri Glacial Mountain Pass.  Incredible vistas of the Andes where other glaciers are over 19,000 feet. 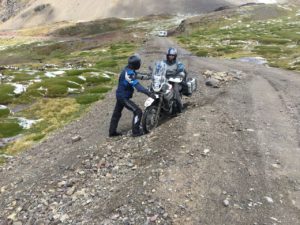 As usual, last night briefing had nothing to do with the reality of today.

I have been getting over some horrible food poisoning and have not eaten and stayed low for the past couple of days.  Really sucked of energy.  A good nights sleep would help, but we just can’t seem to get our shit together for hotels.  Oh, I feel much better today, but am watching everything that is going in my mouth.

Two nights ago, Manfred, Martin and I got eaten up at the hotel with bug bites.  None of us saw them, but I have been bitten all over.  Last night we stayed in a place without heat although we were staying at above 10,000 ft in the mountains and it was super cold.  I wore all my clothes and wool hat to bed again — but happily, we did have hot water for a great shower. 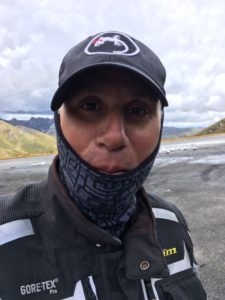 Today, we are staying at sea level and the temperature was 87 degrees when we got here around 5 pm.  No hot water and no ventilation whatsoever in the room.  More impressive, this place only has power from 7pm-9:30 pm at night by the generator.  I dare not eat here — the kitchen is a palace of disturbing animals.  We all sat and waiting for 7 pm to charge our electronics and get light in our rooms.  Not easy.  Guess I’m going to bed at 9:30.

So back to last nights briefing.  Marc mentioned that we can go directly from Huaraz to Barranca, which is about 260km ride or we can take an extra 60km ride on gravel roads and the vistas are beautiful of the glacial Andes — one of the highest around.  The biggest mountain around here is over 22,000 feet and that is nutso tall.  That’s the info we got — we could decide at the fork in the road when we get there.  The problem is that the description “gravel roads” were not exactly accurate.  Sure, when we got to the fork, Marc asked each of us if we wanted to proceed with the gravel road.  Everyone agreed 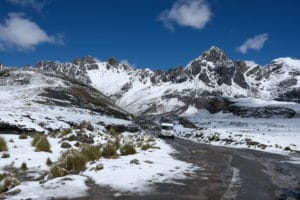 that the views of these majestic mountains, unseen in the USA or Europe are worth the ride.  By way of example, the largest mountain in the European Alps is Mont Blanc at 15,780 feet.  The Germans here are really blown by the size of these Andes.

We then headed off to start the 60km journey.  All was good for the first 20km I would guess.  Nothing too crazy.  BMW motorcycles are meant to be driven on these gravel roads and generally if you learn to ride on 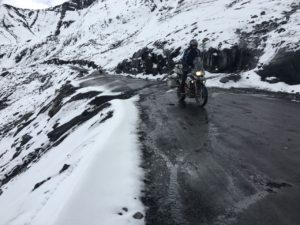 gravel, the bike kind of takes over and it goes over the gravel without spilling you and for me, its more than half fun.  The bikes are really balanced, but super heavy.  The issue started with the final 40km section.   Granted, the views were epic, but the insanity of the ride elevated.  I will be first to admit that my off-road skills are not great — adequate but it’s not like I have grown up with it but it’s the reality of South America.  Problem is that there are degrees of off-road.  Today, it spiked to possibly an unsafe level.

The mountain heights were getting higher into the glacier.  The potholes were getting deeper and slippery with mud.  The surrounding wet soil — otherwise known as mud was replacing gravel.  There are no guardrails on this ride protect you from falling a pretty unhappy injury — you fall, you don’t talk later.  I was too scared to 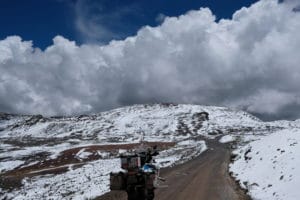 discuss too much.  Just had to dig in and go.  I fell the first time when I hit a large patch of snow — of which a BMW is not designed to tolerate.  Guys picked me up.  Will fell just in front of me.  I also dropped the bike in a huge rut where a large stone lodged itself under my bike and I just could not move my bike since it was lodged.  I was not the only one in trouble, I would say everyone was dealing with the issue of the snow, mud, potholes, ruts, and fear.  At one point I took a line at the edge of the drop side because I thought I had enough grip.  My bike did move in an ugly way and I leaned my body quickly.  That was shitty.

Now that’s the ugly side, the ultra-fantastic side of this 2 hour 40km ride was the views and when I was able to breathe — the feeling that your riding at over 16,000 feet up in the sky and all around you are mountains and peaks much larger and that felt 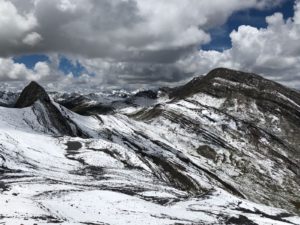 strange.  At 16,000 feet, the air is thin.  When we slept a few nights back at 12,500 feet, we all suffered from severe headaches.  This is a magnitude higher and thinner air.  We all were breathing heavy.  So if I reflect a few hours later, that to me is amazing.  A motorcycle, on a glacier, 16,000 feet in the sky, and just perfectly clear and crisp sky and visibility at around mid-40 degree temperatures.

I shot a video of the last 15 minutes, unfortunately.  I forgot to shoot the entire ride.  It gives a nice view and idea, but sadly, it was taken at lower elevations, at the end when we passed the horrible obstacles, and the stability of the camera is so awesome and does not show the aggressive bumps hitting the bike, nor the depth of field on just how far things really should appear — I.e. the drop.  Anyway, I will post it somehow, it’s a 3gb file.  I like it to remember the idea of today. 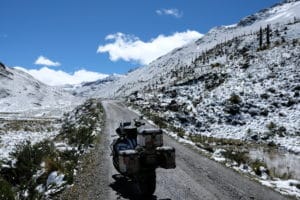 Ok, so we all were sweating and super happy to end the route and found highway again.  We gave each other a huge hug, like a huge hug — parked our bikes for a good 20 minutes to decompress.  Bert could not even move for the first 30 seconds or so.  He just had to deal with that ordeal himself.

We still had a 200km ride after the glacial mountain trek and that was a really nice ride through the mountains, this time on nicer roads — still with tons and tons and tons of switchbacks.  We were descending from about 15,000 feet down to sea level within a couple of hours — to do so, you need to really decent and go around the mountains aggressively.  Fun and focused.  Once near the bottom, you can see by the picture on the right below is the road carving the mountain — a really impressive image of the road going on for a long time — no safety net there either.

Talking with Will later at the hotel, he was pissed — like really pissed.  He thought it is irresponsible to present our journey as a 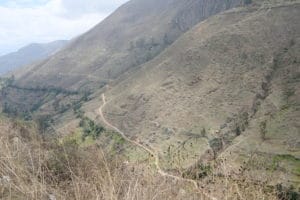 gravel road which nobody cares about — but to end up where someone could get killed is just not right.  He was genuinely pissed.  Will is an excellent and very competent rider by the way.  Manfred, the man’s-man was shaken and quiet but I could see that he was respectful too.  We all reflected I’m sure.  But there is tomorrow.

So back at the hotel here, its a race against the clock to get my stuff charged for tomorrow with my allotted generator time.  We are going tomorrow to be in Lima — or just outside.  I will take the opportunity to see about going to BMW and buying a pair of rain pants if they sell them.  Instead of going to a cultural visit somewhere we all voted to go right to Lima and stay in what is supposed to be a decent hotel for once.  Super excited about going for a shave tomorrow, but have been deflated once or twice before with false promises.

Still, it’s all good.  Its now 5 am the next morning, the sun is now peeking through and I cant post yesterdays blog because we have no internet of course.  Excited to move on.